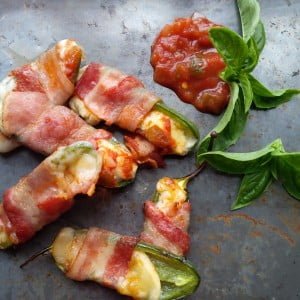 How hot can you stand it?

No, I’m not talking weather-hot…or Brad Pitt-hot (although that would be a funny conversation)…

Everyone tolerates “pepper heat” to varying degrees.  I’ve always been good with hot.  I think it’s because I heard that it helps with weight loss.  According to Malena Perdermo, MS, RD, CDE, affiliate professor of nutrition in the health professions department at the Metropolitan State College of Denver, the capsaicin in peppers (which is an antioxidant) has been shown to slightly curb appetite — at least briefly.  And peppers can also raise body temperature. That warming effect may have another benefit…helping with weight loss.

I’m all over that.

She also says that the more capsaicin, the hotter the pepper, and the higher the antioxidant level.

I’m all over that too.

“Once a person gets used to a hot pepper on the tongue,” says Perdermo, “it actually becomes pleasant. Hot peppers release endorphins, the pleasure hormone.” How that happens isn’t clear. But people in ancient societies, she says, even considered hot peppers an aphrodisiac.

I knew Brad Pitt factored into this somehow.

Try these peppers (which become more mild with the cooking process).  All oozy with cheese, salsa and bacon…throw in some health benefits and some lovin’ action on the side and you have a pretty epic snack.

8 jalapeno peppers, cut in half

About 1/2 – 1 c cheese of your choice (cheese like provolone/friulano/havarti/cheddar will be oozy; cheese like goat cheese or boursin will be creamy)

8 slices of bacon, cut in half  (if you have left-over bacon, take a look at this trick!) 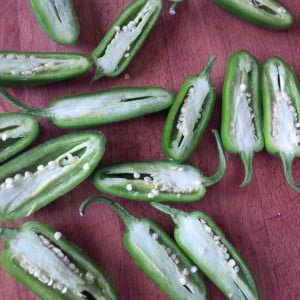 1.  Preheat your oven to 450 degrees.  Line a baking sheet with either foil or parchment (to help with clean-up)

2.  Cut your peppers in half, leaving the stem intact to use as a grabbing handle. 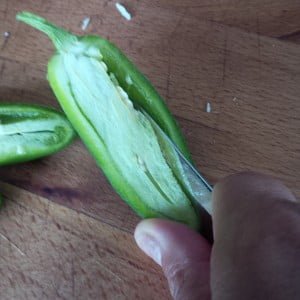 3.  Take the seeds and pith (white stuff) out like this. 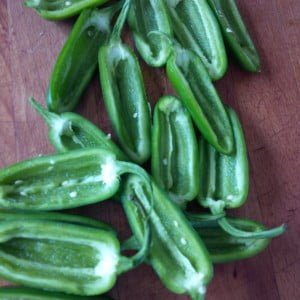 …until they are ready to stuff! 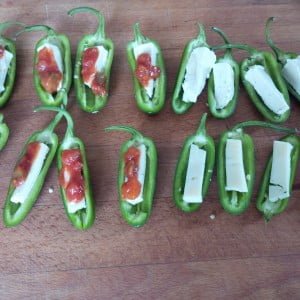 4.  Tuck the cheese into each cavity and top with a bit of salsa if you like. 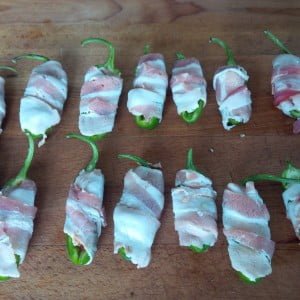 5.  Wrap each with a half a slice of bacon like this.

6.  Cook until the bacon starts to get crispy; serve immediately! 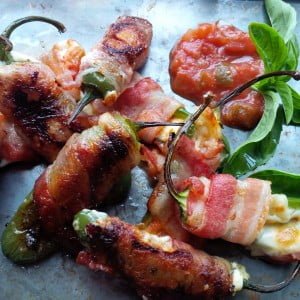 Like I said before, I’ve always been good with hot.