Being Canadian means a lot of things.

It usually means we are very “nice”.

I was in California last month and we were taking a ferry over to Alcatraz.  Once the ferry docked, everyone scurried to get off.  This poor young man, who was wheeling a huge tub around, was trying hard to just get off the boat.  Nobody paid one ounce of attention to him – it was like he wasn’t even there.  I’m sure he had to get that tub somewhere, so I stopped as I approached him and said, “you go ahead of me”.  He looked oddly at me and said, “are you from here?” I said, “no, I’m Canadian”.  He said, “well, that explains everything, doesn’t it?”.

He smiled, nodded and walked off.  Then he turned to me and said, “hey, I bet you make a mean butter tart, don’t ya?”.

Canadians, as well as being nice people (I think the nicest on the planet…but that’s just my feeling), are also known for our butter tarts. The people over at Cottage Life put it best: “Considered Canada’s quintessential dessert, the butter tart has a long, storied history in eastern Canada. The earliest published recipe dates back to 1900 when it appeared in a cookbook from Barrie, Ont. Butter tart connoisseurs will argue over the proper firmness of the pastry, the consistency of the filling and whether walnuts and raisins should be prohibited—but really, it’s all semantics. Any type of butter tart is a good butter tart in our books. A source of pride for Canadians, the butter tart is an important piece of Canada’s culinary identity”.

When I was working for a golf course, I made butter tarts 3 times a week for 4 years…yup, 4 years.  I could make butter tarts in my sleep.  But, even though the old adage says “practice makes perfect”, these butter tarts may not fall into that category.  Not because they aren’t great, but because there are so many idiosyncrasies when it comes to this lowly tart, that my perfect version may not be yours.  My version uses my favourite crust recipe and the filling is perfect –  not too runny and not too firm.  And, never, ever raisins…just a few pecans for good measure. So, when it’s done, it is a sweet, semi-solid, gooey filling with a pecan half for the additional crunch all encased in the flakiest pastry on the planet…it doesn’t get better than that!

This is super easy to make … the only thing that takes a bit of time is the crust.  So, if you want to try this over the Thanksgiving weekend, give it a shot – I’ll even give you permission to buy frozen pie crust.  It’ll be our secret! 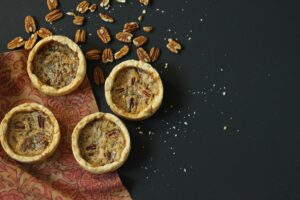 1.  Preheat the oven to 375 and get your pans of choice ready (tart pans or muffin tins).

2.  In a mixer with a wire whisk, mix together brown sugar, corn syrup and butter until incorporated.

3.  Add in eggs, vanilla, salt and cinnamon, mix until combined. 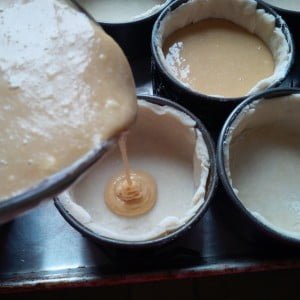 4.  Pour the filling into your tart shells.  I use these mini spring form pans (I like them because you can roll the pastry out pretty thin and you get a good bite of the filling with each bite of pastry), but you can use muffin tins or even mini muffin tins.

** Note:  Do not fill more than half way up because the filling will bubble over and then it will be difficult to release the tart from the tins.  And, if you have leftover filling, you can freeze it for another time! 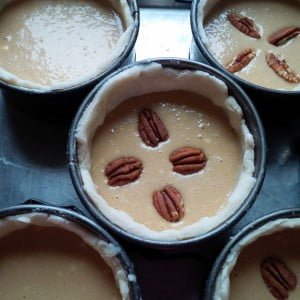 5.  If you’re using pecans, place them on the top nicely (I like 4 halves in these large tart pans).

6.  Bake for about 30 minutes for these tins or 20 minutes for muffin tins.  Just check often and remove from the oven when the pastry begins to get golden and and the filling is set, but still a tad runny.

These have been a favourite request for my Bake it Forward Friday (I usually have a sneaky way of asking the recipient what their favorite dessert is…and so many times, it’s butter tarts!).  So decadent but so easy…

See for yourself what the fuss is all about.

And back to the whole Canadian thing…did you know we also invented the Caesar (cocktail), Trivial Pursuit and the paint roller?  Throw in a couple of butter tarts, and that is the makings of a really great evening. 😉 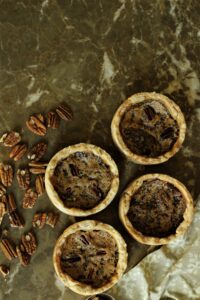