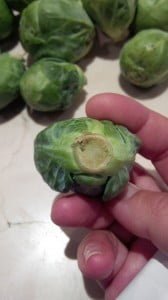 Brussel sprouts are like tiny cabbages…that in itself is awesome!

And the most awesome thing about these?  They are only 43 calories, have potassium and fibre and are loaded with vitamin C!!

But people turn their nose up to brussel sprouts and I think that’s because they’ve never had them any other way besides boiled.

And who wants a plain, boiled vegetable?  You gotta kick it up a notch for it to show it’s true colours, right?

Try this recipe and you will be a brussel sprout lover forever.  But, you should also know how to prepare them because the other problem with boiling them is that they are often cooked for too long…resulting in a very mushy, very unappetizing veg.

1.  Take your brussel sprout and turn it upside down.

2.  Trim off the hard flat end (not a lot though); you will notice the outside leaves will fall away (that’s good because they are often blemished). 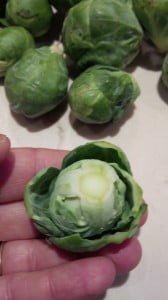 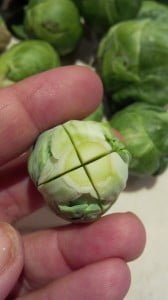 4.  Take a paring knife and make 2 slices (see picture above) just about 1/2 inch deep in a cross pattern.

This will allow the core to cook at the same time as the leafy part – resulting in an evenly cooked sprout.

Boil them for about 10 minutes (you want to blanch them so watch for the bright green colour to appear…that’s usually a good sign that they are done!).