Do you ever think about what is wasted when a recipe calls for lemon?

If you need zest, then you put the zested lemon back in the fridge only to see it dry out quickly.

If you need juice, you throw away tons of beautiful zest.

And what about those lemon halves after they’ve been squeezed?  Do you ever wonder what you could do with those??

Well, you know me…waste not, want not!!

Next time you need lemon, try this:

1.  First, zest the lemon.  If you don’t need the zest right now, leave it out for a few hours until it dries – then store it in your spice cupboard until you need it (or you can roast it in the oven to release the essential oils [just be careful because it can burn easily].  This is awesome in lemony baked goods). 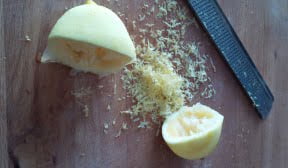 2.  Next, squeeze both halves to get all of the juice out.  If you don’t need the juice right now, pour it into an ice cube tray (or even a snack sized Ziploc) and freeze it for later.  Tip:  you would be amazed at how often a tablespoon of fresh juice livens a dish (think salad dressing, sauteed greens, fresh fish, or a fruit bowl).

3.  Finally, you are left with the 2 halves that are squeezed….do not throw them away!  You can either use them to clean your cutting boards, chop them up and throw them into your garbage compactor (as a deodorizer!) or throw them in a Ziploc bag and keep them in the freezer (I usually throw a couple into the cavity of a chicken that I am about to roast…it’s awesome!!).

You know what they say…”when life gives you lemons…”