Bacon is the reason I am not vegetarian.

It is everything that is worthwhile in one food group  – crispy, salty, smokey and even sweet (have you ever had caramelized bacon?  If you said no, what’s wrong with you?!).

So, if you love bacon as much as me, cook some up (even if it’s a few pieces…store your leftover uncooked bacon like this), set aside the bacon for what ever you plan to do with it (or just scarf it back…I won’t tell anyone), aaaand……. 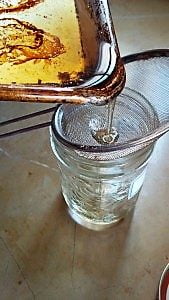 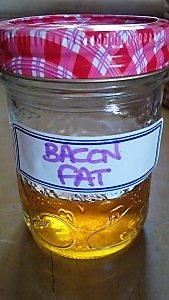 …label it, and throw it in the fridge. 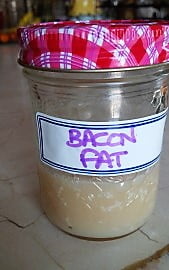 When it’s cold, it will solidify like this. It will keep, like, forever (or at least a couple of months) in the fridge.  If that freaks you out, you can scoop it onto a piece of parchment and freeze it to use whenever you need it.

Not bad for something that was going into the garbage, right?

But, now what do we do with this?  Well, let me tell you:

1.  Roast potatoes with it (actually, when I make bacon  [which I do on a baking sheet by laying the strips straight and cooking them in a 450 oven],  I usually throw a few cut up potatoes on the pan that the bacon was cooked on and roast them.

2.   Rub a few tablespoons on a chicken, sprinkle with some fresh herbs, sea salt and fresh black pepper and you will have the best chicken. Ever.

3.  Brush a little onto your skillet before you make pancakes – the best!

4.  Use a tablespoon in your skillet instead of butter or oil before you make scrambled eggs.

5.  Brush some on the base of your pizza or flatbread before you top it

6.  Caramelize some onions in it

7.  Brush the top of your cornbread with it in the last few minutes of baking

8.  Sub in a few spoonfuls to replace some butter in your next chocolate chip cookie recipe…game changer!

9.  For a quick protein dish:  heat up bacon fat, brown onions, add a can of beans (black, pinto, garbanzo, navy) and heat through; season and enjoy

10.  Spread it on the outside of your grilled cheese sandwich instead of butter

11.  If you don’t have bacon for your spinach salad, use a bit of melted bacon fat instead of olive oil in your dressing!

12.  Use it to pop your popcorn and then top with grated Parmasan

13.  How about bacon mayo or bacon aoli (just sub in meted fat for some of the oil)

15.  If you don’t use lard in your pie crust (what’s wrong with you people?), add in a few tablespoons of this to get that smokey flavour

17.   Add a few tbsp while you are churning this ice cream (the thought makes me salivate)

I should probably stop before you think I’m some crazy bacon lady.

Oh, I’m sorry…is it too late for that?

Heyyyaaaa…. I just got these apple spice mini mu

A beautiful friend sent me this the other day: “

Testing some apple recipes for you guys ‘cause a

How awesome is this weather?! Last week, with all

Wanna dig into a Buddha bowl? Well, you’re in l

So now that our (Canadian) thanksgiving is done, a

You guys still looking for sides for your thanksgi