When I was in culinary school, we learned about everything that had anything to do with food.  Much of what was taught was traditional, like butchering cuts of meat to baking specifics to proper cooking methods.

But, as the course went on, we were introduced to many “new” things.  The first thing I remember that struck me was smoking.  I knew about smoking things like fish, but when we began to cold smoke, that opened up a whole new dimension of flavour (have you ever had a chocolate chip cookie with smoked chocolate chips?  Game changer!).

But, the most mind blowing stuff came out of the segment on molecular gastronomy.  For those of you that don’t know, molecular gastronomy is a branch of food science that utilizes the principles of chemistry, physics and biology to develop delicious food that can be presented in new and interesting ways — solid cocktails, fruit jelly caviar, or vegetable foams and bubbles. It’s basically the science of food you thought could only exist in Willy Wonka’s chocolate factory.  We made custard that would create a “skin” which would allow it to sit on your plate and then be “punctured” to release the custard whenever you wanted it to flow…amazing!

One of the funkiest things we did in our molecular gastronomy section was making powders out of fats (think powdered olive oil!!).  By introducing tapioca maltodextrin to a fat, it will turn it into a powder.  The most versatile fat we powdered was peanut butter…imagine all the ways it could be used! 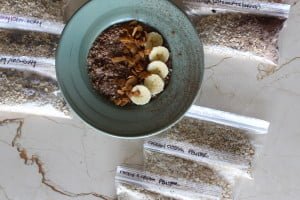 I make oatmeal packs (see above picture or this oatmeal to go post) and I love to flavour them naturally.  But, the problem with many natural flavours is that it isn’t shelf stable or it becomes a gloopey mess.  So, instead of adding peanut butter, I add peanut butter powder. In culinary school, we were taught to mix maltodextrin powder with any fat to make it into a powder.  Now, it’s not the easiest thing to find but you can substitute tapioca starch or tapioca flour for a relatively decent swap (it’s not perfect, but it will do!). 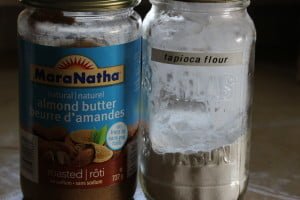 I tried almond butter this time…worked like a charm! 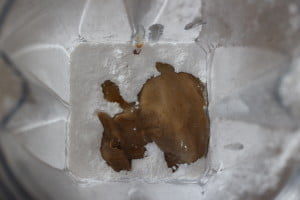 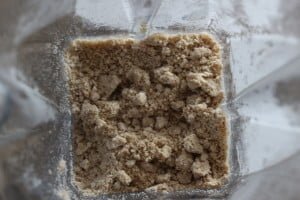 2.  Blend it up, stopping the blender every so often to mix it up a bit until you have a powdery consistency. 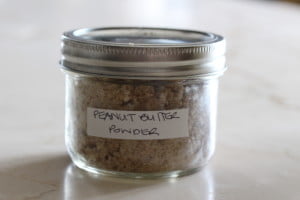 3.  Store it in a covered jar (it will last as long as the peanut butter will last – look for the expiry date on the jar)

WANNA KNOW SOMETHING?? . This week was sauce week