This week’s recipe, taken and adapted from a cookbook that was on my kitchen shelf, is a really good one!

It’s so good, I posted it a long time ago.

So good, I have to repost it!

A few years ago, my daughter and I were in NYC for a few days and I had heard about this great little spot that served all things sweet.  But, honestly, there are about a million places like that in New York.  this one intrigued me because I had read the bio of the girl that ran the place.  She was originally hired as a “office organizer” for the now famous Momofuku (which has since found a spot in downtown Toronto and doing really well!), and while she was pushing paper, the owner, David Chang, saw how incredible her baking skills were…crazy incredible!  She was somewhat of a scientist in the kitchen, churning out crazy things like “cereal milk” (yes, that’s right…like the milk that’s left at the bottom of your breakfast bowl!) and their infamous Crack Pie.  Before long, she found her own spot (directly across from Momofuku…lucky for David!!) and has been creating sugary treats ever since.

This recipe is adapted from an original recipe out of the Momofuku Milk Bar cookbook.  These cookies became a huge hit at the bakery and, if you ever visit, you’re gonna have to stand in line to get your hands on one.  But, I live too far so I bought the book and made it “user friendly”.  In my version, we’ll use real ground coffee (not instant and not grounds that have been brewed), as well as really sturdy potato chips; not thin ones that will break down in the baking process.  I know the ingredients sound bizarre, but, the cookies truly are an amazing taste explosion in your mouth.
Testament:  I taught this at one of my cooking classes 3 years ago, and a woman last week who was in my class and took that cookie class said she loves them so much that she makes them all the time…exactly how I taught her!!
Nice, huh??

after the flour is combined, dump the rest in, leaving the chips and pretzels to go in last! 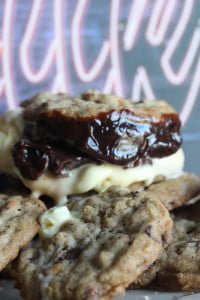 ah heck, throw some ice cream and chocolate sauce in the middle…why not?  There’s already too much sugar here to worry about!!