Today is International Women’s Day and the internet has been full of messages from all over the world, touting the incredible effect women have had on our planet.

And like all of you, I have had many women in my life who have made an impact and have played a roll in molding me into who I am today.

But, there are also many women in the food world that I live in, who have blossomed as they have aged.  Women who have made an impact on the young women who follow them.

Julia Child, best known for her television series, began her life as a copy editor, and after realizing that , at 6″2′, she was too tall to enlist in the army or navy, she began her work in secret intelligence.  It wasn’t until she was well into her prime that food came into the picture.  She single handedly taught Americans everything about French cooking.  For a woman to command that kind of attention during a time when men ruled the food world, she has remained one of my food heroes.

Alice Waters, an American chef (and activist) opened Chez Panisse, a restaurant ahead of its time,using locally sourced and home grown ingredients.  She fought to make the public aware that home cooked meals trumped convenience food – a tough sell during the 70’s when pre-prepard foods were what people wanted. She was such a visionary, forging a path where people are now just venturing into.

Martha Stewart, who began her life as a model and then stock broker, reinvented the word “housewife” and made every woman envious of her ability to cater elaborate meals and throw incredible parties at a moments notice.  She even managed to go to jail and come out unscathed. Like her or not, you have to give her credit for having the courage to take a woman’s lowly position in the home (and that is definitively how it was perceived back then) and elevate that idea into a billion dollar empire.

Moving closer to home, my mom showed grit by becoming a butcher in the 60’s…a time when most women went into secretarial work.  I honestly don’t think she thought anything of it (she is definitely not a “push the boundaries” kind of woman) but I have to give her credit for sticking it out in a man’s world (plus, now, we always have the best sopressata, prosciutto and sausages in the cellar!)

And, finally, coming full circle to my polenta, my nonna.  I spent quite a bit of time with her in the kitchen (most often just watching, as many Italian kitchens weren’t a place for kids to have fun in).  I can’t say she “loved” cooking…like most women of her generation, it was their job to feed their families, so they did what was necessary to get a nutritious meal on the table.

What I do remember about her was that big pot used only for polenta, a huge wooden spoon (a special one that had a long handle used most often just for this dish) and her strong arm, stirring for what seemed to be an eternity. I used to stand so close to her that I could smell her…you know, that “grandmother” smell.  Whenever I make polenta now as an adult, I often smell her.  Maybe she’s right there beside me telling me “ancora qualche minuto ed e perfetto” …a few more minutes and it’s perfect. 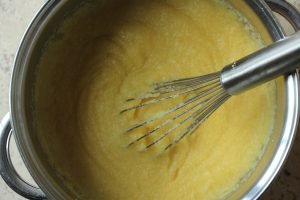 The trick to this polenta, is corn kernels that have been soaked in milk and cooked into the polenta at the end.

The parm and butter are essential for the ultimate creaminess and, don’t be tempted to cook it for less time…it may seem done but it will be gritty when you are eating it. 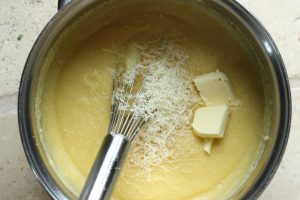 Polenta is served a million different ways, depending on where you originate from in Italy.  However, where we are from, it was served soft usually accompanied by a rich meat sauce or a roasted meat like this braciola (stuffed rolled flank steak). 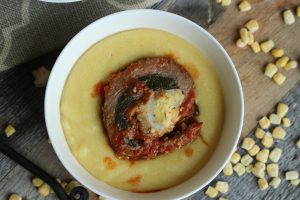 It’s perfect comfort food for late winter when you need some belly filling goodness to get you through the next few week when Mother Nature will start giving you a sneak peak at the beautiful weather that’s on the horizon. 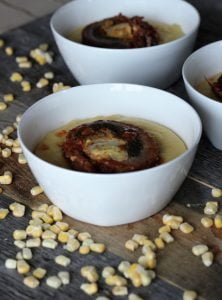 Make a potful of this and keep the rest in the fridge for a few days…if you brown some butter in a skillet and slice the cold polenta thick, crisp it up in the butter on all sides and serve it as a totally different side dish…kind of like bread. Why not think of different ways you can re-invent it and call it your own creation? And, if you’re a woman, throw around some of those creative juices…after all, if Julia Child could go from a CIA agent to a french Chef, and Alice Waters from an activist to a farm to table goddess, and Martha Stewart from a Wall street trader to The Maven of All Things Domestic, I think you can make a lowly bowl of cornmeal into something spectacular too!

Save Print
Ode to My Nonna: The Creamiest Polenta Ever
Author: Suzie Durigon
Recipe type: starch/grain
Cuisine: Italian
Prep time:  30 mins
Cook time:  30 mins
Total time:  1 hour
Serves: 6-8
The creamiest polenta, like, ever!! And once you learn that one small trick, you'll never go back to that store bought tube again!!!
Ingredients
Instructions
3.5.3229

Having a hard time sticking to a healthy eating pl

“Some people arrive in your life and make such a