I just want to say something right here…

The internet is a pretty fabulous place to hang out.

And I’ll go even further.

Social media can be a great place to make new friends.

Yup, I said that too.

Last week, I had a “virtual” conversation with a lovely woman named Suzanne who runs a blog called The Pretty Feed.  She was asking me about my no-knead bread that I had posted, and that exchange led to a completely different conversation about traditional Easter bread from Italy.  She told me she had a recipe from her grandmother called Pane di Pasqua (the literal translation, Easter Bread).  Now, many parts of Italy have their own version of holiday bread (for example, my mom’s Easter bread is savoury and filled with swirls of sausage and eggs) but this sweet version is pretty common.  It’s much like challah bread that would grace the table at many Jewish dinners, and with the addition of the coloured egg and braids, it is a very similar bread to that which might be presented at many Easter tables in Greece, Russia and the Czech Republic.  The base for most is the same: a brioche dough that is rich with eggs and butter and has a nice, sweet finish.  It is super soft … a bit like eating pillows of softness that melt in your mouth!  Depending on who is making the bread, it might be filled with dried/candied fruits, citrus, nuts, anise and then, maybe finished with an icing sugar glaze for a white coating or a brush of melted granulated sugar before adding the sprinkles (giving it a shiny coat). And, the very last touch is either sprinkles or course sugar.

The braid is most often formed into a circle, symbolizing the crown that Jesus wore on the cross and the coloured eggs represent the resurrection of Christ and a rebirth of the spring season. 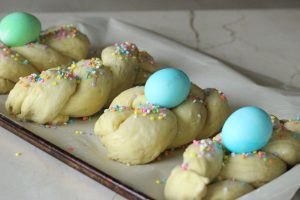 If you’ve ever made yeasted bread, this is a joy to make.  Yes, there are a few more steps than making regular bread, but it’s relatively easy.

When I spoke to Suzanne, I asked her if there was a story behind her recipe.  She said there was and sent me a lovely story about her grandmother.  I was going to paraphrase it, but she wrote it with such love and meaning, that I’ve decided to leave it as it was written. 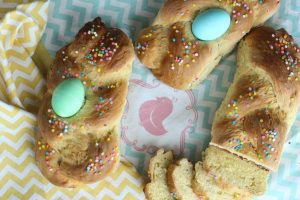 “The bread is traditionally known through Italy as Pane di Pasqua (literally translated, bread of Easter).  As I mentioned, the ‘traditional’ recipe includes citrus and anise which my grandmothers didn’t.  My grandmother was from Bari, Italy,  as was my grandfather.  My grandmother emigrated to the United States in the early 1900’s as a teenager.  She was 5’ 7” – blonde and blue-eyed.  My grandfather was also from Bari, and he emigrated at around the same time.  He was 5’ 4” with dark brown eyes.  They lived in the same town but never met.  He would see her walking around town but he never spoke to her.  A mutual friend introduced them in the United States.   She lived in Corona, NY (where all the Italians lived way back then) and he lived upstate with his brothers.  He couldn’t believe his good luck when they were introduced.  They got married, had four children, and lived the American dream. (my mother was #3).  Grandma was an amazing cook and each and every Sunday (like all Italian families) we gathered around the big dining table and had supper – which was always a multi-course affair.   Holidays and ‘name days’ were a big deal.   As I mentioned my grandmother would make 50-60 of these loaves – with the woman who lived in the apartment above (in true American success my grandfather bought a townhouse which had two apartments – one for them and one income producing!)  – Pena – who helped her make all these bread.   We always begged for extra bread as we would devour the first one the morning after we received them and wanted another for later in the week.  My grandmother taught me all her special recipes – either in person or over the phone when I got married.  She also taught me never to waste anything – and I am true to that today.  She canned and preserved and we had a cold storage room in her house where the summer’s bounty could be accessed during the cold winter months.  She made Strufoli for my mother for her birthday and anise and wine cookies for my Aunt.  She was one of the wisest women I know – kind, generous and a very evolved human being.  For my grandmother, since she never went back to Italy, the food she made told a story – of her family, her origins and how she viewed life. ”

How lovely is that story??  I told Suzanne that, after reading this recounting of her grandmother’s life, I almost wished I could be transported back to that time so that I could sit with her and chat over a cup of espresso and, of course, a big slice of Pane di Pasqua!

Thanks so much Suzanne, for sharing your story! Food is love, indeed!