Can you tell that I am still crushing on Italy?

It’s been over a month since I’ve been back from Piedmont and I just can’t stop thinking about all of the things we ate and drank and learned while I was away.

One of the many things that intrigued me was that they make this incredible braised beef (it usually calls for the breast of beef which in North America is often simply referred to as chuck or pot roast) all year long.  In places like Canada, we make dished like that in the winter and turn to more summer-centric dishes like barbecued ribs in the summer.  But the reality is we are all busy in the summer and what better way to eat (and entertain) than to make a dish that basically cooks itself? 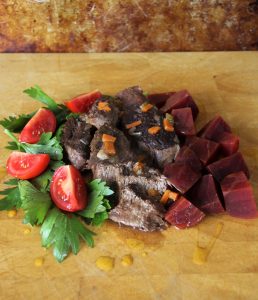 The prominent slow braised beef dish is known as brasato al Barolo…and when the people at True Italian Taste wanted us to learn about this dish, they took us directly to the town where the lovely wine is made.  Barolo is actually in a valley (which is unusual in wine country) and the hamlet has a population of only 750 people.

Barolo, known as the king of wines, and the wine of kings, is made in the Langhe hills from Nebbiolo Grapes.  When we went for our wine tasting, we learned so much about what unique flavour combinations there are in this wine.  If you are a serious wine connoisseur, you will pick up hints of forest fruits, brandied cherries and candied fruit with notes of rose and violet, cinnamon, pepper, nutmeg, vanilla and sometimes liquorice, chocolate, tobacco and even lather!  This amazing wine must be matured for at least three years (1 1/2 of which must be in oak barrels) and after five years it can then rightfully take the name of Riserva. 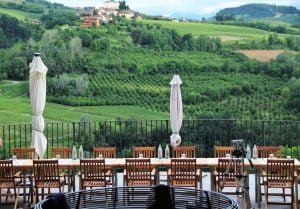 After learning all about the complexity of this incredible wine, we went on to have a fabulous meal at Castiglione Falletto. It was here that we tried brasato and many other meat specialties from the region. 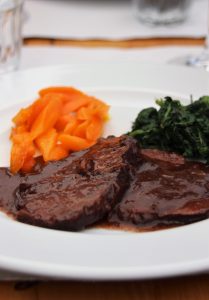 The meaning of this dish literally translates into “braised in barolo”which uses a simple slow cooking technique to further develop the flavors.  The dish we had was so tender, you could eat it with a spoon!!

They set such a beautiful table which could only add to the spectacular food!! 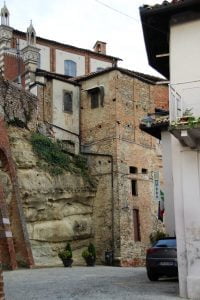 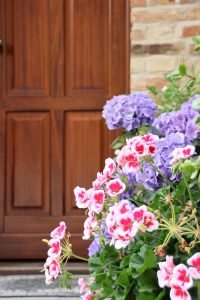 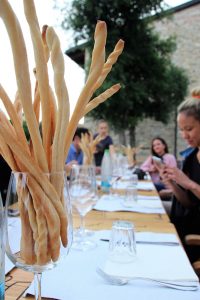 We began our dinner with an appetizer plate that had tartar (raw chopped beef which is very popular in northern Italy!), thinly sliced tongue with a tomato concasse, rolled and stuffed anchovy fillets and rabbit with a balsamic drizzle…heaven!! 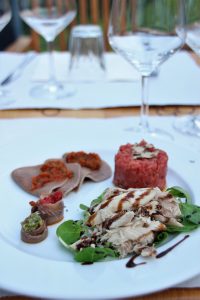 When we took a tour of Baladin, one of the finest craft breweries in Italy, they served us one of the most unusual delicacies of the region…Bra!  Best described by the Slow Food Foundation, it is “a mix generally made of 70-80% lean veal finely minced and 20-30% pig’s fat. In ancient times the fat was from beef as well, but, due to its high perishability, it was later replaced by pig’s. The base seasoning includes sea salt, white pepper, nutmeg, cinnamon and mace. Many producers also enrich it with garlic, fennel, leeks, cheese (parmesan, aged robiola or toma delle Langhe), white wine and even sparkling wine or prosecco for Christmas. The mix, which needs to be kept moist and soft, is stuffed in a small ram’s gut”.

It feels very strange to eat what looks like raw sausage but it is wonderful!! We ate it every chance we had!! 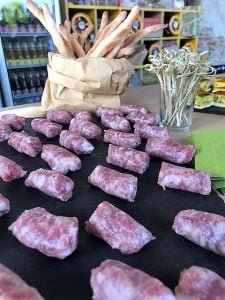 The other meat that is seen on quite a few restaurant menus is vitello tonatto, which is roasted veal that we had very thinly sliced and topped with a tuna mayonnaise mixture.  I’ve had it served warm and sliced thickly but I prefer this version!! 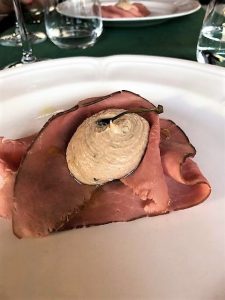 We had even more braised meat but this time served on a bed of purreed potatoes.  I expected to see these meats served on polenta (a soft cornmeal served in the north) but it’s known more in Friuli than it is in Piedmonte. 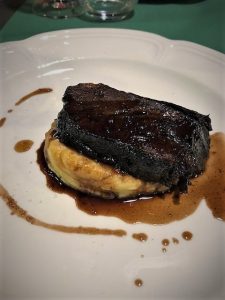 And we can’t talk about Italian meats without talking about my favorite Italian cold cut…mortadella.  In this area, it is almost exclusively sold with pistachio nuts right in the meat…amazing!! 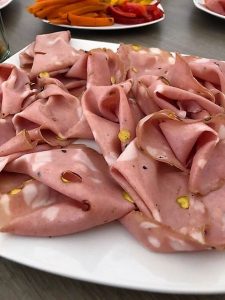 What would you have on your plate if you ate here?? 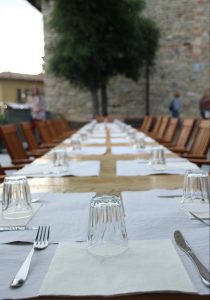 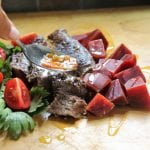 This typical slow cooked beef dish from the Piedmont region is generally made with a breast of beef or chuck roast.  I've made it with shoulder and even brisket (just remember, the more lean the mea, the longer it needs to cook).  It is cooked low and slow in a bath of Barolo...what could possibly be better than that?