I have a funny story to tell you.

And, yes, it’s about mashed potatoes.

When I was a kid, we always had a lot of food around the table. My mom was a butcher by trade and we are Italian, so I don’t think I need to say much more to paint a clear picture for you about what my dinner table would have looked like.

The funny thing is my mom did a few things that, in hindsight, were really weird. She would butcher a whole cow, portion it out and freeze steaks, roasts, ground beef and homemade sausage for us to have all year long.  But when it came to something as simple as mashed potatoes, she only ever used boxed mashed potatoes.

Yup, those flakes of glory were what I knew to be mashed potatoes as a kid.

Fast forward into my teenage life, and I was having dinner at a friend’s house one night.  They were having mashed potatoes….REAL mashed potatoes.  I watched her mom mashing the boiled potatoes and adding all kinds of yumminess and I asked, “wow, what’s that you’re making?”

As an adult, I make mashed potatoes all the time (they are an absolute family favorite!).  But, honestly, I never thought about posting a recipe for them. 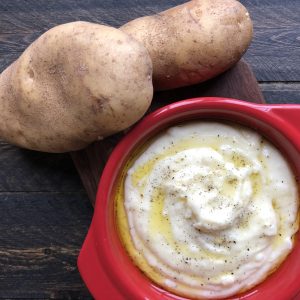 I mean, most people know how to make mashed potatoes (whether they make them or not is a different story!). And, if someone has never made mashed potatoes, I’m thinking it would be pretty easy to follow a recipe and get it right.

But, lately, I’ve been thinking a lot about simple recipes. Sometimes, it’s the most simple things in life that are the most difficult to get right.  For example, mashed potatoes should be creamy and silky and flavorful.  But, not everyone knows how to get all of those attributes in one bowl of simple mashed potatoes. Also, there are tricks to get a bowl of perfect “mash” that nobody ever tells you about! 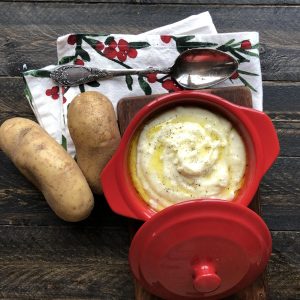 The first time I made mashed potatoes from scratch, I was newly married.  I boiled the potatoes and, when they were tender, I shut off the pot and walked away…for, like, an hour! When I cam back to drain them, they had disintegrated into the water and became one soupy mess.

Note to self: drain water immediately (and, why did nobody tell me that it was a bad idea to leave them sitting in water?).  But, the more often I made them, the more “how to make great mashed potatoes” details I learned.  Like, leave them in the pot for a bit to dry out…that’s a good tip! 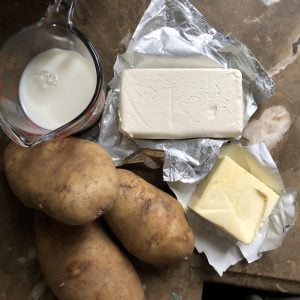 The next tip I learned (which was out of necessity because I was hosting a big family dinner and had to make a pile of things ahead of time) was to add some cream cheese to the mix.  It somehow creates amazing “staying” power…you can keep them warm for a lot longer when you add the cream cheese and they reheat so well!

The other tip is using the right kind of potatoes.  If you use waxy potatoes, the mixture will end up gummy.  I almost always use russet potatoes and that means I can place them in my stand up mixer with the whisk attachment and come out with the creamiest mashed potatoes (without having to use a ricer!!) 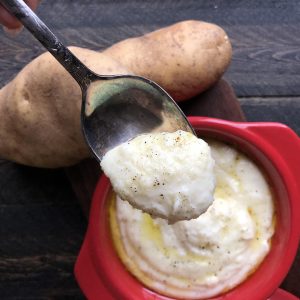 And the last thing is that you can add whatever flavor you like to your mashed potatoes.  Want a Greek flair? Add a spoonful of olive tapenade and crumble some feta into the mix!  Need some middle Eastern flavors? Add in some cumin and drizzle with some bold extra virgin olive oil.  Want to kick up the flavor with some autumn vibes?  Swirl in some browned butter.  Trust me…that last one is a game changer!!

This is the first installment on a series of posts I’ll be doing to get your holiday table in tip top shape! 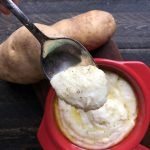 Why fuss over part of your dinner that you can totally make ahead.  These mashed potatoes, thanks to the cream cheese and egg yolk, have amazing holding power. And, guess what?  They taste even better the next day!!

Christmas Tip 2: Make sure, especially during this

Christmas Tip #1: If you’re at a holiday party a