I recently was sent this article by a good friend of mine (thank you Vince!) in the Globe and Mail titled “Do People Not Know How to Cook Anymore”  and it really got me thinking….

And, when I’m happily puttering away, I wonder what it is that makes me happy in the kitchen compared to the many people I’ve taught over the years. Why is it that they don’t have that same love affair with cooking/baking?  Well, I had an in depth discussion with Vince (who also loves to cook!) over on Facebook…this is what the conversation sounded like:

“So much of this article resonates with me because it’s what I’ve been trying to teach for decades.  “Cook with your heart” I tell people who come to my classes… but that always seems to paralyze them. When did this change?? Is it because, way back in the day, women (because, like it or not, it was women who did all the cooking) who didn’t work outside the home (which was most) made it their mission to hone their trade and learn everything about cooking because that, along with housekeeping, was their “job”? And now, we think this “job” of housekeeping and cooking isn’t valuable enough? Or at least, it’s like Pinterest… everyone is curious enough to pin it but not eager enough to cook it?
I remember teaching a class and a woman looked at the recipe that asked for the eggs to be separated, and she said “how far do you separate them from each other?”  (as an aside, I wasn’t sure what my face did when she said that to me, but I sure hope it wasn’t bad).  Afterwards, I thought, she obviously hadn’t spent time in the kitchen.
We live during a time where things that were exclusively for the upper class (like having a cleaning lady) are common even among university students with no money.  However, daily things that should be as second nature as brushing your teeth, have been left to the professionals (enter in boxed meals that have everything in there including instructions).
After reading the article, I actually thought I should do a blog post of this EXACT thing…explaining why this is such a problem and maybe, once a month, give people and “un-recipe” and get them to tag me with their final product.  I bet everyone would have a different dish and that would make me the most happy!”

So, I bit the bullet and am finally posting an un-recipe!  I have been wanting to post something like this for a long time.

When I thought about a dish that didn’t really require a recipe but had so much to offer in terms of creating something yummy with what you have in your house, I thought I would start with a simple soup (because, unless you burn it, you can’t really mess up soup).  Once you’ve mastered the soup and gained some “I can’t believe I made that all by myself’ confidence, you’ll be able to forge ahead with other recipes.  The biggest thing stopping most people from creating really awesome food without a recipe is fear….and today we are going to crush that fear into the next century!!

For this soup, I started with things I had hanging around – leeks (I had from a photo shoot), onions, potatoes (which I didn’t end up using but I’ll get to that later), garlic, squash and pancetta (in the freezer) 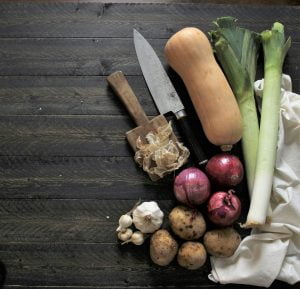 Onions have a nice bite.

Garlic, once roasted, is totally different that onions (there is a sweetness and creaminess there).

Leeks, I thought, can get crispy (how nice would it be to get some crispy bits in an otherwise creamy soup).

Squash gives the ulitmate creaminess without having to add dairy and it’s sweetness is unlike the sweetness from the roasted garlic.

Potato, which I didn’t end up using because the squash is starchy enough, I had on stand-by in case I needed it later (if you put a half of a potato into an over-salted soup, it will absorb some of the salt – but you just have to remove it before serving).

Pancetta, which if you aren’t familiar with is un-smoked bacon used in a lot of Italian cooking, will add some “umami” (the savory taste that is one of the five basic tastes); the smokiness from bacon would be great here so feel free to substitute it or you can totally leave it out. 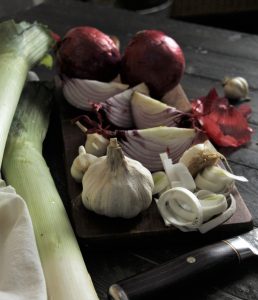 I cut them all up, put the garlic (cut the top off to expose the buds/cloves) in the middle of a baking sheet and then piled all the other veggies (cut into smaller pieces) and pancetta around it. Douse with lots of olive oil, freshly ground pepper and a fair bit of salt (don’t worry if you’re not sure how much to use…it’s a matter of taste, but there will be a lot of time to season again later if you under-salt it here) and bake at a high temp until they caramelize!! 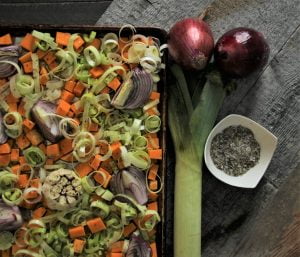 I mean, would ya look at those onions!!!! 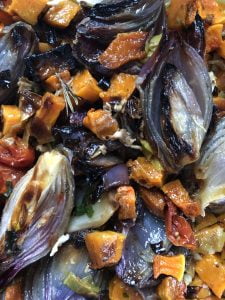 Then, put it all in a blender and puree it.  It will be quite thick but that’s okay.

Another aside here:  this thick puree would be great ladled onto plates and then topped with roasted sturdy fish (like sea bass) or pork tenderloin!! 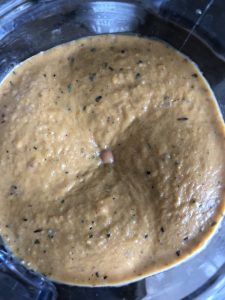 Now is the time to thin it out as much as you like.  Want it more creamy?  Add some milk or unflavoured nut milk.

Want a Thai spin on it? Add some coconut milk and some spices!

Just want an amazing bowl of flavourful soup without having to put more thought into it?  Just add a carton of stock (can be chicken stock or or beef stock or even vegetable stock!).

Add enough to make it as thin as you like.

Want some texture in there? Add a handful of spinach or even some cooked rice or small pasta.

Maybe salt (remember, salt is a flavour enhancer…not only does it add saltiness, but it also accentuates other flavours…never leave it out). 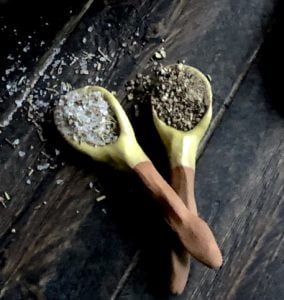 Maybe you need a spicy kick (feel free to add some chili’s for heat, or some hot pepper flakes or even some hot sauce…and I promise, you have to put a lot in the soup to really feel the heat!).

Maybe you need a bit of sweetness (a good drizzle of balsamic usually does the trick, but if you don’t have it, throw in a spoonful of brown sugar or some honey/maple syrup).

Maybe it needs depth (you know, sometimes you taste a dish and it tastes bland but it’s not about the salt…it may mean you need another layer of flavour…you can slowly cooked some minced garlic in a few tablespoons of olive oil and then pour the whole lot in!) 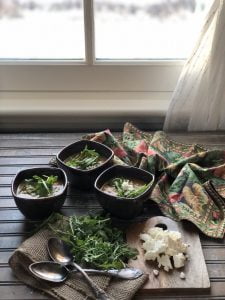 Then the final magic begins when you top it with anything you like (or nothing at all!).

Sometimes when you taste a dish and you think it needs something, a topper will usually do the trick (maybe a bit of freshness in the form of greens).

I topped mine with things I had in the fridge (some arugula and crumbled feta) but you can use anything.

If you took the Thai route (with coconut milk), you could top it with crushed peanuts.

You could spoon a dollop of cold plain Greek yogurt on top with some chopped fresh herbs.

You could just drizzle a bit of really good olive oil on top (heck, while you’re at it, give it a splash of balsamic!!). 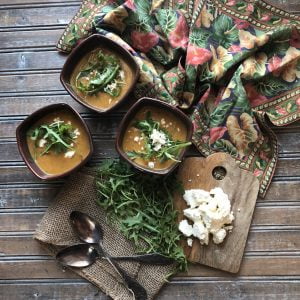 So that is it people.

No recipe this week.

No amounts.  No ingredients.

Just some courage to throw caution to the wind and create something magnificent!!

So next time you think, “how do I cook without a recipe?”, hear my voice say…. 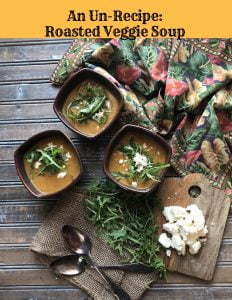