And, you guys know me by now…I hardly ever struggle for words.

The problem started when this new (but not really new) interest in all things sourdough began in mid March of this year. With the virus in full swing and people now at home, many were taking to baking and, for whatever reason, sourdough bread became the “new thing to do”.

And, actually, I think I know the reason it became a “thing”.

When things like this pandemic happen, people panic and realize the importance of the essential things in their life that they had taken for granted all these years.

And, when seemingly smart people start thinking about these essentials, they realize that buying chickens to make eggs, buying a small counter top mill to mill wheat into flour, setting aside a piece of their backyard for the cow they will need to milk are all no easy feats.

But, making bread is doable. 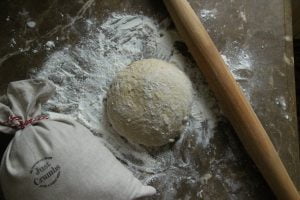 And when people realized they should learn how to make bread (which is so funny because just a few years ago, every treated bread like a leper!!), all the stores ran out of commercial yeast.

Enter in exhibit A: homemade yeast…better known to the world now as starter.

I started getting so many questions about making a starter and baking bread, so I revived an old starter that I had. And that’s when I had an epiphany. Maybe I should write a blog post about making your own starter but I will do a few things differently:

What is a Sourdough Starter?

If you mix together any milled (ground) grain with a liquid (usually water but some people swear by milk or even the cooled water leftover after boiling potatoes) and let it sit, loosely covered, at room temperature, wild yeasts in the air (and from the flour) will settle in the mix, eat the natural sugars and convert them into (mainly) lactic acids. This is what will eventually give sourdough bread it’s sour flavor. The starter, when active, will also give off alcohol and carbon dioxide (it’s the carbon dioxide is what will make the bread rise). This creates bubbles that get trapped into the structure of the bread. The greater the bubbles, the better the “crumb” (airy bread).

There is a lot of information (especially now) on the web. However, I found this great explanation of how this all began (over at The Kitchen Project):

“The first recorded civilization we know about that used sourdough was the Egyptians around 1500 BC. There are many stories as to how they first discovered it, but you can probably imagine that some bread was left out and some of the wild yeast spores that are in the air at all times got mixed in the dough and they noticed that it rose and was lighter than the usual flat breads.

The Egyptians also made a lot of beer and the brewery and the bakery were often in the same place. a batch of flour may have been mixed with beer and produced a light loaf of bread, or the wild yeast spores were thick from the brewing and they got into the bread doughs and caused them to rise considerably more than the usual wild sourdoughs.“

But, now to the real truth…where did I learn about it?

Well, years ago, when I was a young adult, my nonna told me about life back home and how, often, housewives would borrow “biga” from each other.  A biga, of course, is Italian for starter. She told me that, back in the day, they would make their own starter by burying grapes under flour and let it sit for a few days (they figured if grapes could ferment wine, then of course it could do the same for bread). They were poor farmers and would never have been able to buy things like yeast so they made their own. I always knew she was smart! They always had a bowlful of starter on their counter and if, by chance, theirs grew mold on it, they would borrow some from a neighbour. 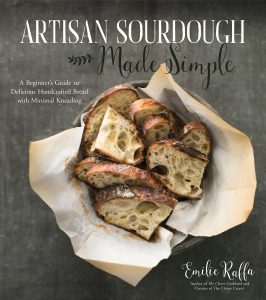 Her book was absolutely beautiful and, to be totally honest, I had gotten really good at making no-knead bread (you can see my easy recipe here) and had forgotten about this sourdough bread stuff. Her book was full of the most beautiful loaves that it got me hooked! As I began teaching, over the years, I would talk about it to people that wanted to learn to bake, but it always fell on deaf ears. I think it just seemed too daunting to new bakers.

Whats the Difference between Different Types of Starters:

If you’re new to this whole bread baking thing, you may not know that there are certain words that have been floating around when it comes to sourdough starters. A sourdough starter, as explained above, is a pre-ferment you create from gathering microbes from the air to make your own yeast. If you’re Italian, you may have heard of a biga, which, in essence, is a sourdough starter. A poolish, is the same thing (but in Polish) and tends to be a bit more watery. A levain (French for “leaven”) is similar to a starter but is a piece of dough held back from a dough made to bake off and then the piece is usually preserved under flour or salt until the next time you bake. It’s usually revived in water before it’s used to make your next loaf of bread. An English sponge is usually more firm than a poolish but fluffier than a levain. In the end, they are all methods to create a “starter” that can be used to bake amazing bread!

So, now that you’re in the know about all things sourdough, let’s get to making a starter!

ON YOUR FIRST DAY: Create Your Starter

b) Combine with a fork until smooth; the mixture will be thick (almost like a pasty pancake batter).

c) If you have a cold work space, wrap your jar in a heating pad and set on the lowest setting; cover loosely with a clean kitchen cloth or the lid of the jar a bit askew and let it rest in a warm spot (or wrapped in your heating pad) for 24 hours.

ON YOUR SECOND DAY: Check your Starter

a) If you see bubbles today, that means that the mixture has begun to ferment (which is the whole point of this process), so if any small bubbles have appeared on the surface, that means you are on the right track.

b) If you don’t see anything that’s okay too (you may have missed the fermentation process of the bubbles rising and falling while you asleep).

Today is just about checking your mixture. Some people say if you see bubbles you can start feeding it, but I’ve always left it for the third day (regardless of what is happening). Just keep resting your starter in a warm spot for another 24 hours.

ON YOUR THIRD DAY: Let the Feeding Begin

a) Today is the day! Even if you don’t see bubbles (remember you may have missed the rising and falling process while you slept), it’s time to start the feeding process.

b) What you need to do is remove and set aside about half of your starter from the jar (some people throw this away (hence the term discard) but I keep it in another jar in my fridge and have made some epic recipe like these peanut butter and chocolate brownie bites, and these crispy biscuits. The texture will most likely be stretchy so you may need a spoon. And, remember, this jar of discard (sometimes referred to as spent starter because it “spent”…yeast that is not active) kept in the refrigerator is what you add your daily discard to – the stuff you will be pouring of of your starter before you feed it. You can imagine that, if you bake a lot of bread (or in the beginning stages when you are getting your starter up and running), you will collect a lot of discard – hence all the recipes you’ll find using sourdough discard. 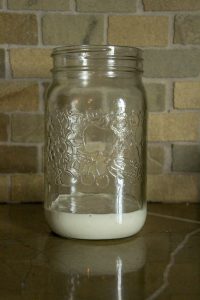 c) Now you need to add your “feed” which is about 60 g (1⁄2 cup) of all-purpose flour and 60 g (1/4 cup) of water – I prefer to weigh my ingredients because so many people measure differently. Mix with a fork until smooth. It should look like a thick pancake batter so add more water if you need to. 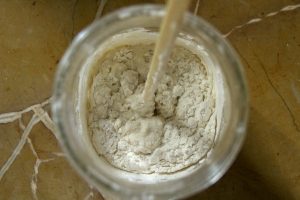 d) This is when you need to place your elastic band around the jar where the mixture is to measure any growth. 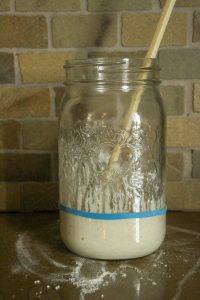 e) Cover loosely with a clean kitchen cloth or the lid of the jar a bit askew, and let rest in your warm spot for another 24 hours.

b) As the yeast starts to mature, your starter may rise above the elastic band (you will first see bubbles form on the surface and, as the days go by, you should see the bubbles throughout the whole culture). 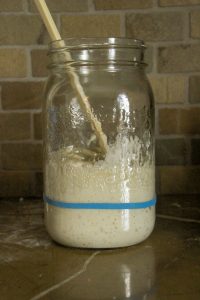 c) If you are able to see the the mixture has risen and fallen, you’ll know it’s time to feed it again.

ON YOUR SEVENTH DAY: You May Have a New Family Member!

a) If you have noticed that your sourdough starter has doubled in size, you are good to go and can use the starter to make your first loaf (at this point, if it’s ready, you should see plenty of large and small bubbles. Your starter should now be a bit spongy – many people describe this like marshmallows that have been melted or roasted – and it should have a pleasant, “yeasty” smell (not astringent). If you can check off all of these points, your starter should now be active. If you still aren’t sure if your starter is ready to use, it should pass the float test – after it has doubled in size, drop a teaspoon of the starter into a glass of water; if it floats to the top it’s ready. 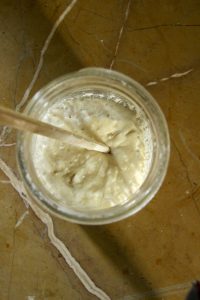 Note: If you have reached day 7 and your starter is not ready, it’s ok.  For many people it takes longer than 7 days to activate a healthy starter (mine tool almost 2 weeks). Just continue to feed your starter daily and be patient! Remember this is a living organism and every starter will be different depending on the environment (temperature, natural spores that exist in the air, altitude, etc)

If you like, you can transfer your starter to a clean jar (it will feel “fresh” because, by now you will have crusting that will have formed along the side – which will not hurt the starter but it will clean it up if you transfer it).

And finally, as most traditionalists do, you can name your starter! Many people name it after a family dog or a child…I, of course, named mine Jane Dough!

If you’ve made it all the way to the bottom, thank you for reading (and making all the research worth while).

And, if you really want to make me happy, send me pics of your starters…and tell me what you called your newly adopted family member.