I need to ask a few very important questions…

These are questions that have been on my mind for the past month…actually, almost exactly a month.  I’ve been thinking about it since March 13th.

I remember because March 13th is my birthday and that was the day this pandemic became real to Canadians.

Until then it was certainly scary for us. We would see news reports of Wuhan, China and the troubling circumstances that many people there had to endure. We saw images of once busy streets now barren and a fear spreading across a nation of inevitable doom.  But, for many of us in North America, it felt as if we were living on the set of an apocalyptic movie. 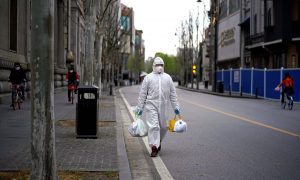 But, when it became real in Canada, we acted in true Canadian fashion…we did what we were told. We hunkered down. We socially distanced. We took care of our families and checked in on our friends. And we did whatever it took to take our minds off of what was happening in the big, bad world.

For many people here (and around the world), their lives changed and in order to adapt, they “pivoted” (a word that will be forever attached to 2020 and Covid19). They worked from home if they could. They home-schooled their children, and they took up projects that may have been put off for years. Maybe they pulled out their puzzles and had family game nights. Maybe they took up knitting. But the one thing so many people did was what was an essential skill for many of their ancestors…they started making their own food.

They realized that putting together ingredients and making food from scratch was far easier than manoeuvring the next scariest place besides the local hospital…the grocery store. So people who had never turned on their ovens began cooking AND baking – something many weren’t that comfortable with before this time of isolation. Many who has never found the time to cook for themselves found a renewed interest in making meals from scratch. This seemed like a simple task that many people have always known how to do but, it today’s world, it just seemed easier to contract the cooking out to someone else. Even after Martha Stewart made “home keeping” sexy again, our need for fast and convenient trumped most things homemade that took longer than 7 minutes to get to the table. Deb Perelman, founder of the Smitten Kitchen and cookbook author gave another perspective saying, “Our parents were afraid to raise us in the kitchen. They wanted us to do other things and not be stuck cooking for a family for the rest of our lives”. And, if cooking for our families was considered an ordeal, then baking certainly wasn’t seen as something that was necessarily useful….especailly since baking isn’t about just throwing some ingredients in a pan and calling it a day. It takes thought. It takes precision. And, the truth is, it’s not always easy.

So, why the sudden interest in something that might create added stress during an already stressful time?

I think it has something to to with people keeping their bodies and minds occupied through the simple act of making something. Baking has become the perfect cure for the boredom that comes from having been told you must stay put. It keeps your hands busy while keeping your mind nimble on a project that requires focus and creativity – two things we are craving during this unusual time. During a time of upheaval, the thought of baking and creating something from scratch is comforting. It might bring up feelings of nostalgia – the smell of that chocolate chip cookie your mama used to make for you when you were a child brings back feelings of comfort, safety, and the belief that everything will be okay. Maybe the rhythm of scooping out flour and sugar, whisking eggs and scraping the sides of a bowl seems to help all the world’s troubles melt away. Maybe it’s the beauty in knowing that you can create something nourishing from beginning to end – something that many of us need when the times we are living in seem so uncertain.

So, one of the questions that has been hounding me is why have people ignored the act of baking until now? I don’t think it’s because people hated making cakes or thought that attempting to craft your own pizza dough from scratch was dumb. I think it all changed when women returned to the workplace in the 70’s and 80’s and they – those generally assigned the duties of ‘cook/ baker in the kitchen’ – had less time. And, had the world not changed, their duties may have been shared with others in their home. But, with the accessibility of prepared foods from grocery stores and restaurants, it was easier to order in than to learn how to fit meal prep into an already busy day. So, home cooked meals and freshly baked goodies became less about meal prep and more about efficiency. 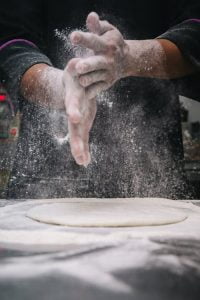 But then along came a major historical (and worldwide) event that would change the landscape of how we live our lives. People couldn’t just run to their local bakery to grab a loaf of bread. Mamas couldn’t just order that superhero cake for their 6 year old’s birthday. It was now a necessity to learn how to do it yourself…at least for the unforeseeable future. So, we rolled up our sleeves, googled things like, “how to make the most epic sourdough starter” and got down to business. Many people have told me that learning how to bake has brought them tremendous joy and many have said it gave them purpose during a very unpredictable time. It made them realize that, even if they were unsure of what their jobs would look when they would return to their “new normal”, at least they mastered the art of baking bread.

I mean, it literally gave a nation purpose. You may not know if your job will be the same in 6 months, but at least you mastered a new skill. It feels a little bit like when you learned to tie your shoes.

But my real question – and I pose it to those of you who were not proficient in the kitchen before this pandemic – will you keep baking when this is all over? 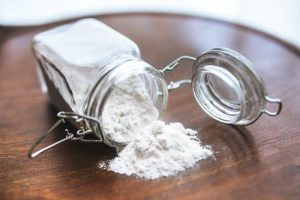