This week I joined in a Masterclass with the Italian Chamber of Commerce and learned all about Italian bread.  It was fascinating!

Among other tidbits of information, I was quickly reminded that bread is still a staple in the lives of most Italians. It has been around in some form or another for thousands of years and, although much has changed over the years, so much has also stayed the same.  What hasn’t changed is the formula for basic bread…flour + water + yeast = bread. The shorter the ingredient list , the more authentic it is. And although historically, these three ingredients were all that were used to make bread around the world, the introduction of different flavours began to pop up as people around the world began to share their cultural differences through travel. 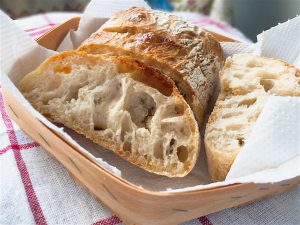 A Brief History of Bread:

In 2500 BC, eating bread was a sign of civilization

In 1500 BC, Egyptians began making bread with yeast

In 753 BC, as Rome was founded, bread was essential to feed it’s armies

In 1628, Alessandro Manzoni wrote about the revolts sparked by raising bread prices

In 1945 WWII, bread is scarce and rationed before and after the war (then it became valued!!).

In Italian, pasta madre means sourdough. Italian sourdough is not particularly acidic like San Francisco sourdough. There are two types of sourdough starters that are used by Italians. The first is a biga (or bighino when in small amounts), which is a drier type of pre-ferment and not only gives strength to what in Italy are weak flours, but also produces a secondary fermentation. The second type is a poolish which is a fairly wet sponge as it’s typically made with a one-part-flour-to-one-part-water ratio by weight, and makes bread with a bigger crumb (more open holes).

Yeast: Many Italians use fresh yeast which they believe is better, but with the influence of the Western culture, dry yeast can now be found in many stores and used often.

Flour: Soft wheat flour is used in the Northern parts of Italy while Southern Italy uses durum wheat. Rye is used in the Alpine regions and spelt in the Tuscany region.

Fats: Olive oil is used in bread making in most parts of Italy (except in the far north), lard is used in the north (or even butter) to enrich the bread. In Tuscany, it’s not uncommon to find unsalted bread because that region produces a lot of cold cuts (which tend to be salty)  and to balance out the eating experience, the bread has no salt. Sicily is one of the few places in Italy that uses sesame seeds in bread because of the Arabic influence.

In the North, bread is produced as smaller loaves with a more compact crumb. It’s often crunchy and dry (sometimes airy) because of their environment (the humidity in those regions would make stale stale and starchy).

In the South, larger loaves are baked with an open crumb, creating a softer bread to deal with the dry heat.

Focaccia is a staple in Liguria (where they use lots of olive oil), while the island of Sardinia produces a large amount of unleavened bread and decorated elaborate breads that are often part of weddings and celebrations (some  breads even come with their own label to make sure it is certified and to ensure that they stand out from other breads from other regions).

Bread has most often been used as an accompaniment to a meal in Italy but it is also often used as part of a recipe such as salad (Panzanella, a salad made with fresh vegetables and stale bread), soup (Papa al Pomodoro, a soup made from a tomato base where bread is used as a thickener),  pasta (pasta con mollica where bread crumbs are used instead of cheese), canederli (bread dumplings found in the north east of Italy), passatelli (like an Italian spaetzle served in broth), pancotto (a Tuscan bread soup) and the list goes on!

Today, supermarket and packaged loaves are on the rise as they are being introduced into the marketplace but Italians are now returning to traditional breads. The North is more likely to try the “North American” loaves while Southerners are more likely to consume the highest amount of homemade bread.

Most breads in Italy are made with white flour but whole wheat and ancient grains are now being used and locally produced grains are also being used.

After the Masterclass was over, we had a question and answer session and one of the questions that we asked Chef Carlo Maria Ricci, our guide, was what his favourite bread was and he said it was, hands down, focaccia! I asked for his recipe but it was in European measures (all weighed), it was for 4 focaccia’s and there were ingredients that you may not be able to get here (malt paste). I began to decipher the recipe and make substitutions but it felt wrong to change his recipe – in the end, it would have been totally different.

Instead, I’ve shared with you a very simple focaccia using my secret (potato) for a chewier texture. It takes a few hours to rise and is a great accompaniment for your dinner table! 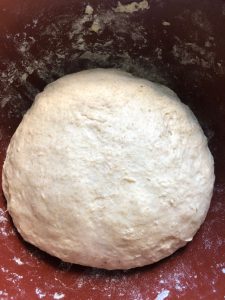 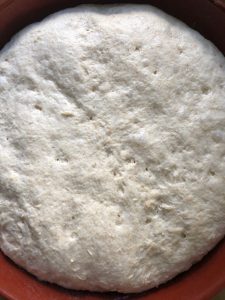 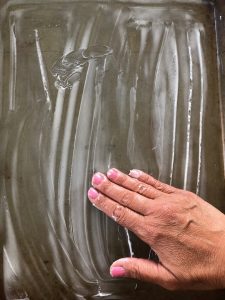 My trick for using lard to coat the pan! 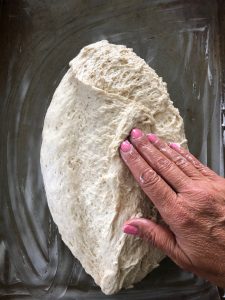 Scrape the dough into the prepared baking pan 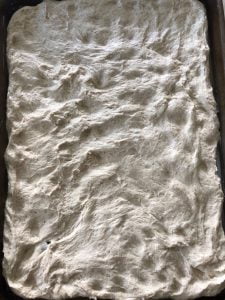 Making sure it gets into the corners…then let it rest! 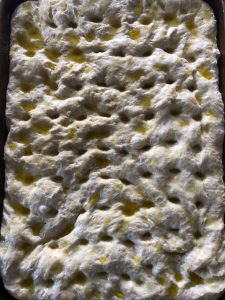 Dimple the dough, give it a good douse of olive oil and a generous sprinkling of salt – then it’s ready for the oven!! 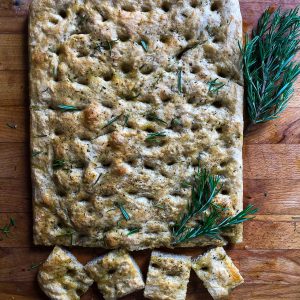 Tutti a tavola (everyone to the table!!) 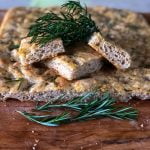 How to Make Focaccia

Focaccia is pizza's plain sister...but fluffier! This focaccia is crispy on the outside and chewy on the inside! A perfect vehicle for an afternoon snack or a super sandwich!