But we are still in the middle of a pandemic so there will be no celebrating.

But he WILL have cake…’cause getting to 84 is a feat unto itself these days (note to my children…if I make it to 84, I want cake every damn day…y’all hear me?).

I’ve been meaning to try this cake out because I’ve seen it all over Pinterest and it just screamed nostalgia…AND it’s called Do Nothing Cake!

What better cake to make during a pandemic when you literal can do nothing? 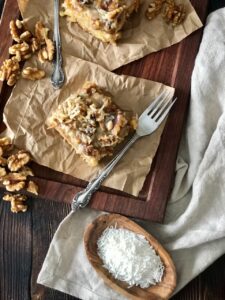 “Why is it called DO NOTHING cake?” Well, this cake was created before boxed cake mixes were invented. Back in the day, you would have to beat butter for half an hour or add yeast and wait for the rise. You’d also need special kitchen equipment like a scale. So, because all of the ingredients could be measured with a cup and the frosting didn’t require you to beat the butter for 30 minutes until light and fluffy, this was considered a true “Do Nothing Cake”.

This cake also goes by the name Texas Tornado Cake (same recipe except it usually uses fruit cocktail instead of pineapple). I’ve also seen a very similar cake go by the name of  Church Lady Cake or Chop Suey Cake (although both of these seem to always have cream cheese frosting on them).

It really got me thinking about box cake mixes, so please welcome to my brain as I digress to the history of boxed cake mixes (stay with me)…

This article from Bon Apetite on The History of The Cake Mix gave me such a thrill:

Though the standard line is that the cake mix was born after World War II and was developed by corporate mills that had too much flour on their hands, it’s really older—it was brought into being at least as early as the 1930s, thanks to a surplus not of flour but of molasses.

We have a Pittsburgh company called P. Duff and Sons to thank. On Dec. 10, 1930, the company’s John D. Duff applied for a patent for an “invention [that] relates to a dehydrated flour for use in making pastry products and to a process of making the same.” In the application, Duff’s mix for gingerbread involved creating a powder of wheat flour, molasses, sugar, shortening, salt, baking soda, powdered whole egg, ginger, and cinnamon that the home cook could rehydrate with water, then bake.

What it was really about was about using up molasses,” says culinary historian Laura Shapiro, author of Something from the Oven: Reinventing Dinner in 1950s America and queen of cake-mix historians. “People were eating differently, and food and how they made it had changed drastically. So Duff figured out how to dry it and add it to a flour mix.”

And the Duff recipe certainly wasn’t stingy with the molasses—each batch calls for 100 pounds of wheat flour and 100 pounds of molasses.

“Then they figured out they had a good thing on their hands,” Shapiro says.

Indeed, the company seems to have believed it had stumbled on the future of baking, and eventually brought the method it patented to bear on cakes, giving us what appear to be the first cake mixes.

Kk…let’s move onto this fab cake…

These are the simple ingredients: 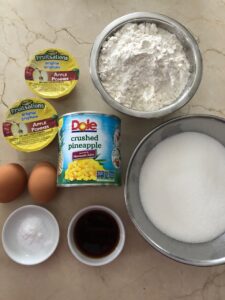 I tried to make it a “wee bit” lower in sugar by replacing some of the pineapple with applesauce (partly because the original recipe called for a 20 oz can of pineapple and I only had the small can) and you literally mix all the cake ingredients in one bowl (no mixer!!). 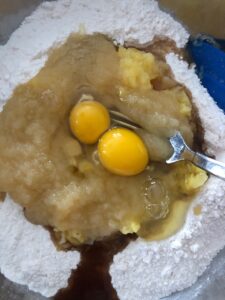 Mix it all up, throw it in the oven and 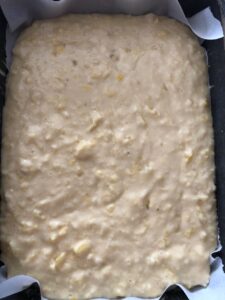 melt together all the frosting ingredients (kinda like a take on German Chocolate Cake).. 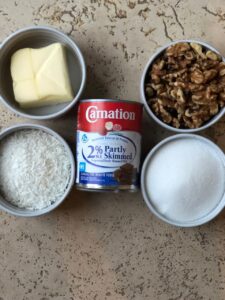 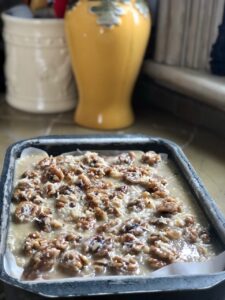 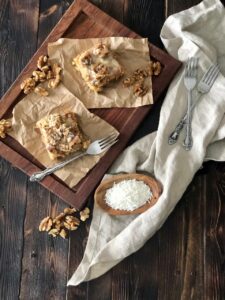 Does that not look epic?

Yes it’s sweet but it’s also EPIC (did I say that already?)

And if you don’t like sweet, gooey desserts, go eat a piece of kale or something…

Pin this image (below) for later – like, when you can’t find kale! 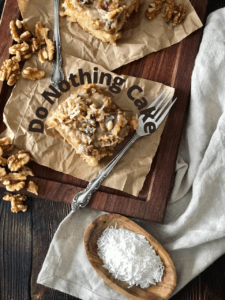 Do Nothing Cake (aka Texas Tornado Cake)

This pineapple dump cake (which is also a play on a classic "poke" cake) with coconut walnut frosting is super moist and ridiculously easy to make!