I took take a bit of a break from this space and social media.

Although it was mainly family matters that stopped me from posting for over a month, I just found that the state of the world had pushed me (and many others) to the brink.

Yes, we’ve all been through so much these past two years.

But, this last February, Russia’s invasion of the Ukraine seemed to be the straw that broke the camel’s back. Of course there has been war throughout our history and, yes, there have been acts of aggression and refugee crises due to war all over the world in the past. But, this war, coming on the heels of a worldwide pandemic and more political divide than we’ve seen in years, just made so many of us feel helpless beyond belief.

I began to think that what I do in this space was trivial and not at all helpful to what was going on in the world. I just couldn’t find anything of value to share that would make things better.

I knew I had to get out of this funk.

I was speaking to a good friend of mine who is a chef, cookbook author and blogger (the lovely Aimee Bourque). She is of Ukrainian decent and when I shared my feelings, she said, “maybe you just need to share a traditional Ukrainian recipe and, in doing so, you might shed some light on what’s going on in the world…maybe just make your audience more aware through food”.

I began researching the foods of Ukraine when I remembered that I had developed a recipe for a grocery store years ago and it was indeed a food from the Ukraine.

Borsch, the beet and cabbage soup we all (or at least most of us) connect to Russia has, stronger ties to Ukrainian gastronomy (this is what I found in the research that I did). If you’d like to take a deeper dive, this article from the BBC explains it in more detail. 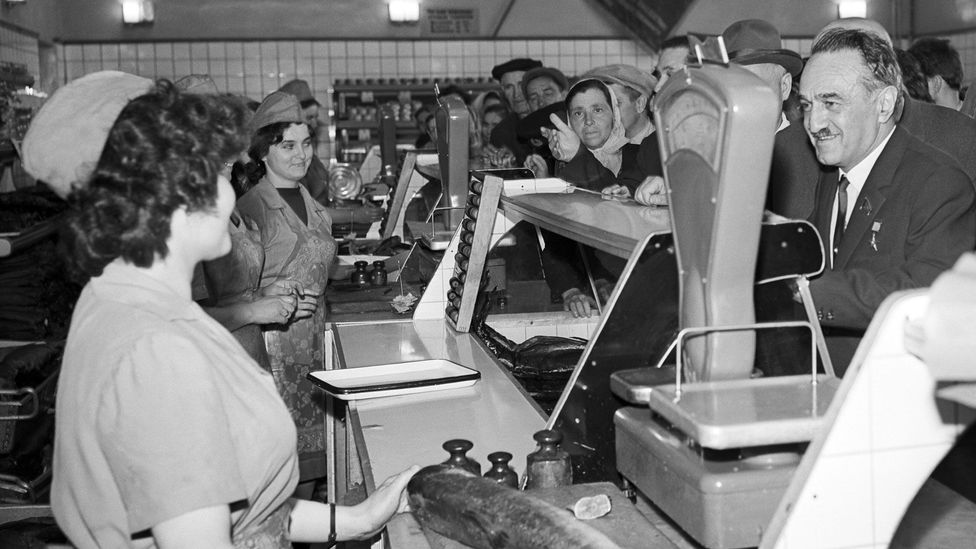 The original version was made with meat but the version I made in 2017 was vegetarian. The only change I made was adding some apple cider vinegar, as I noticed some versions add a fermented liquid to add a bit of ‘zing”.

Adding the vinegar was a game changer!!

This is a super, delicious soup that is: 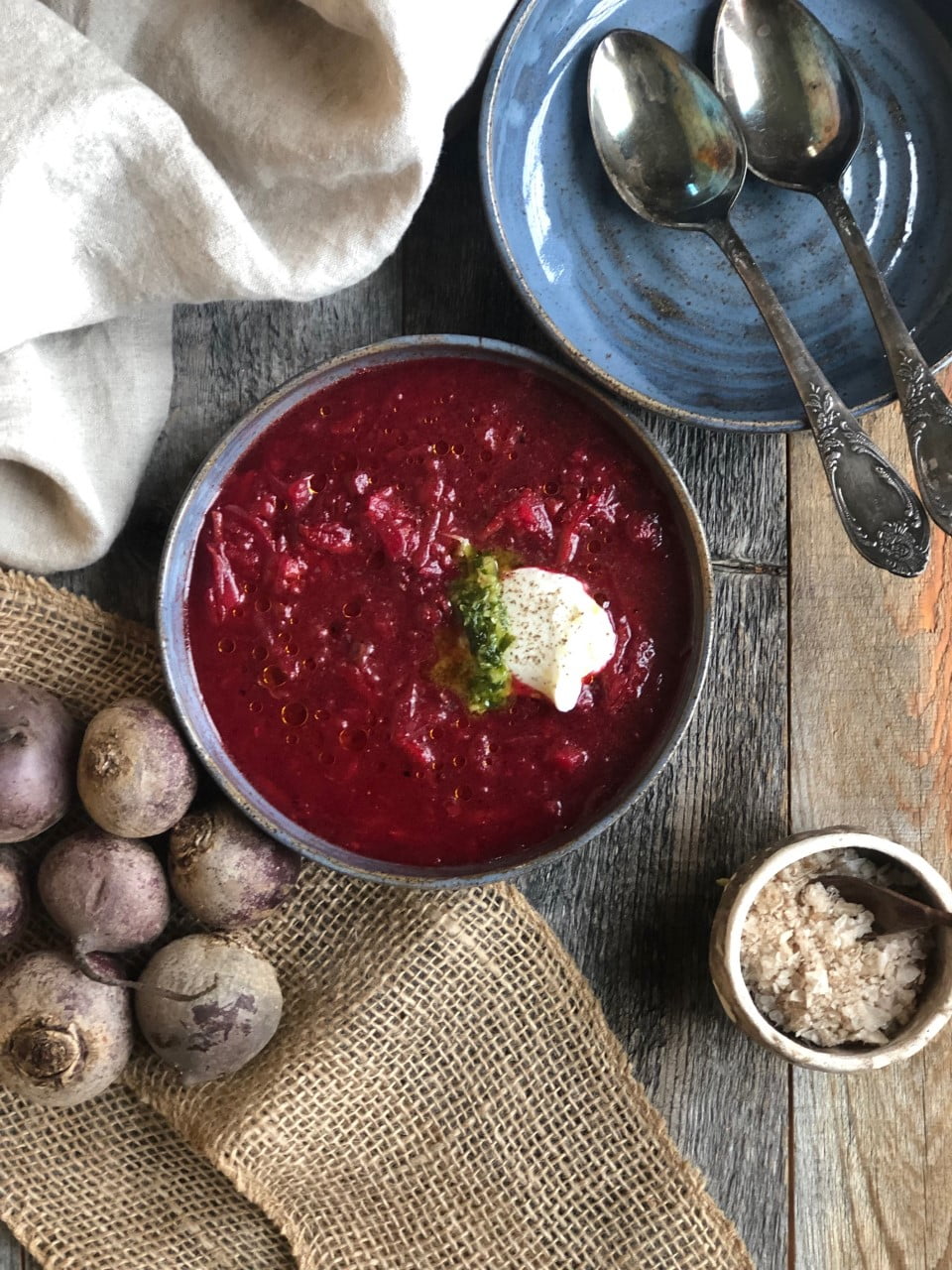 Grating the beets helps speed along the cooking process. 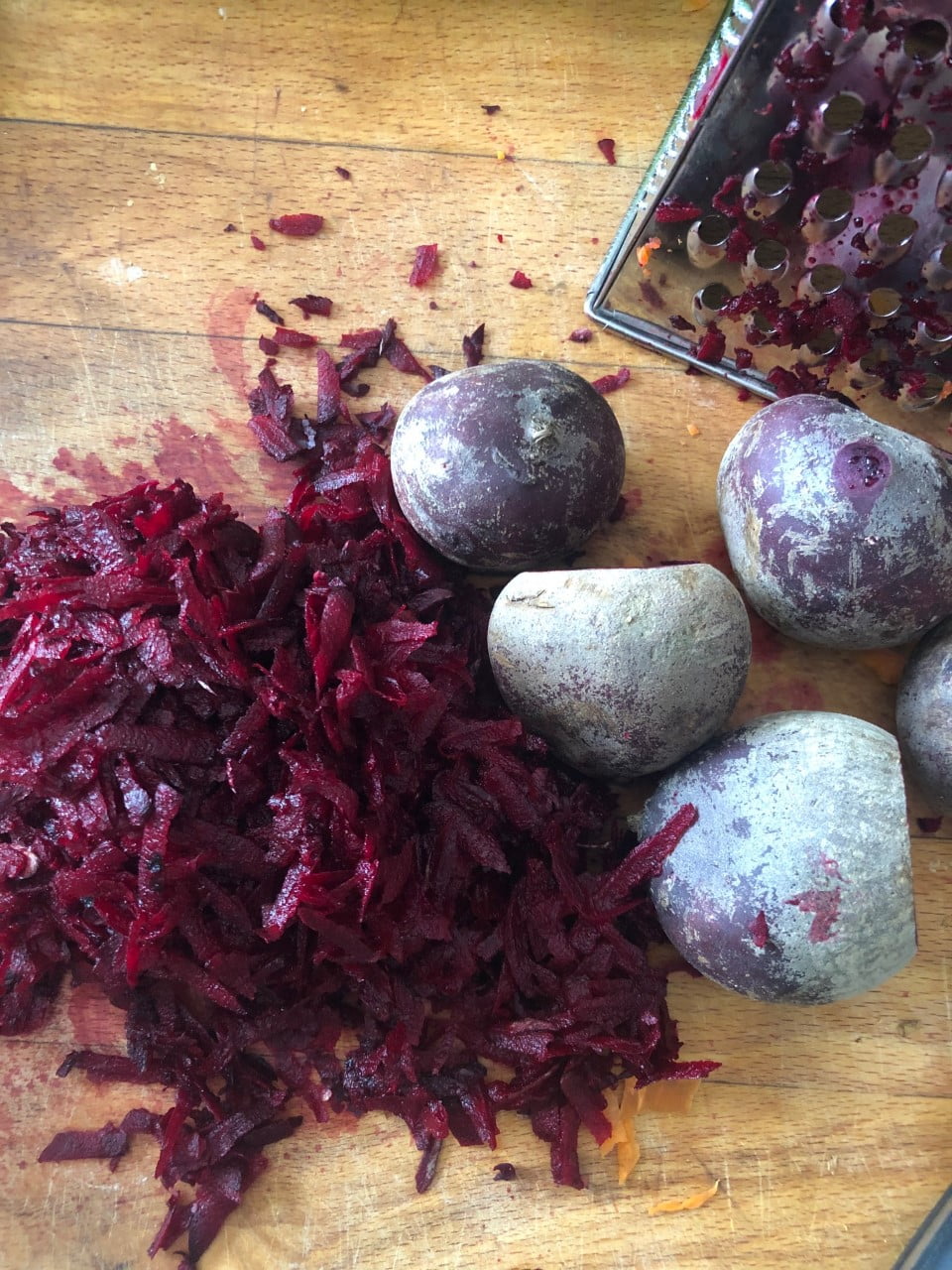 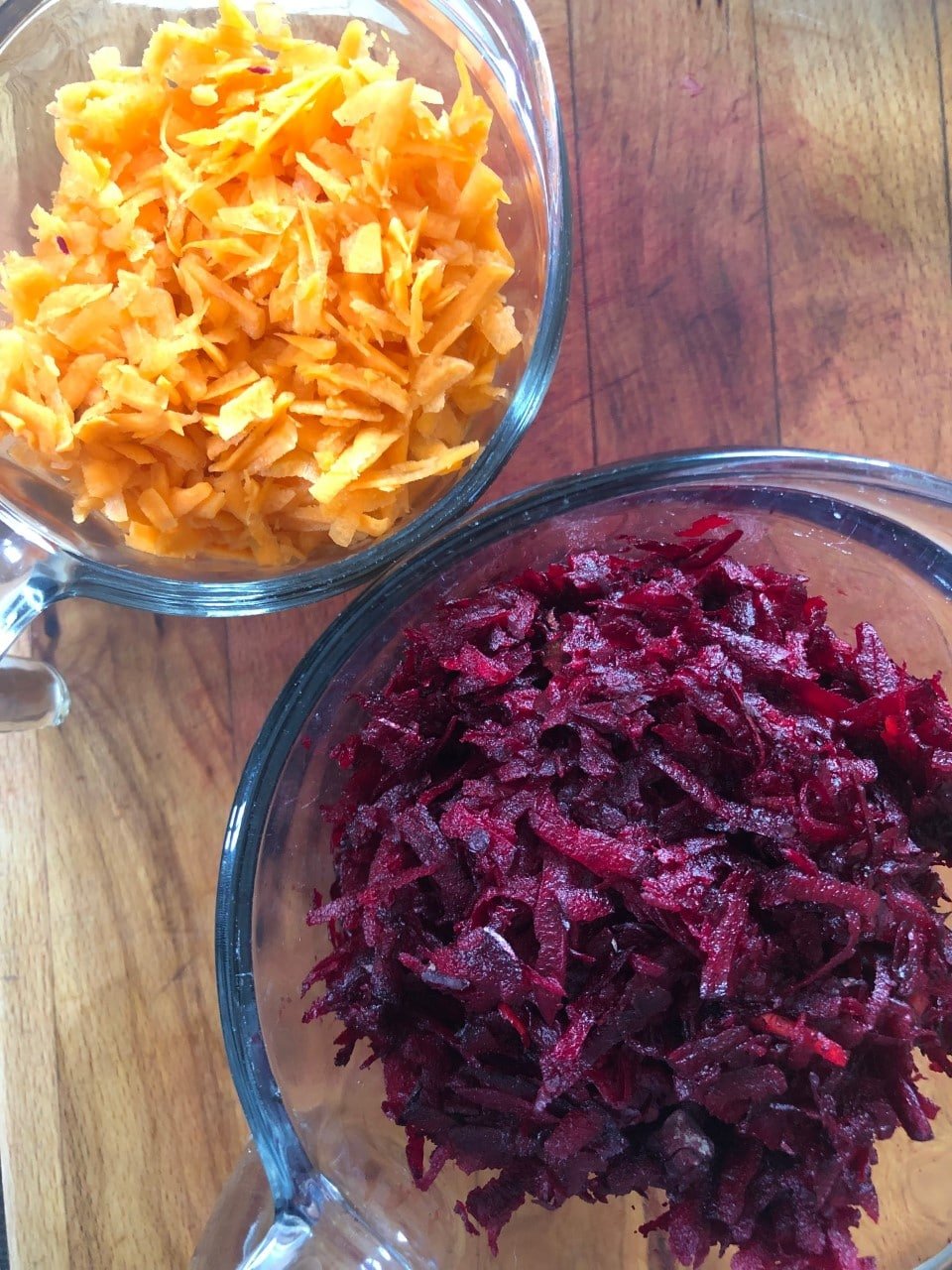 I used white cabbage but, I believe the traditional recipe calls for red cabbage. Either will work. 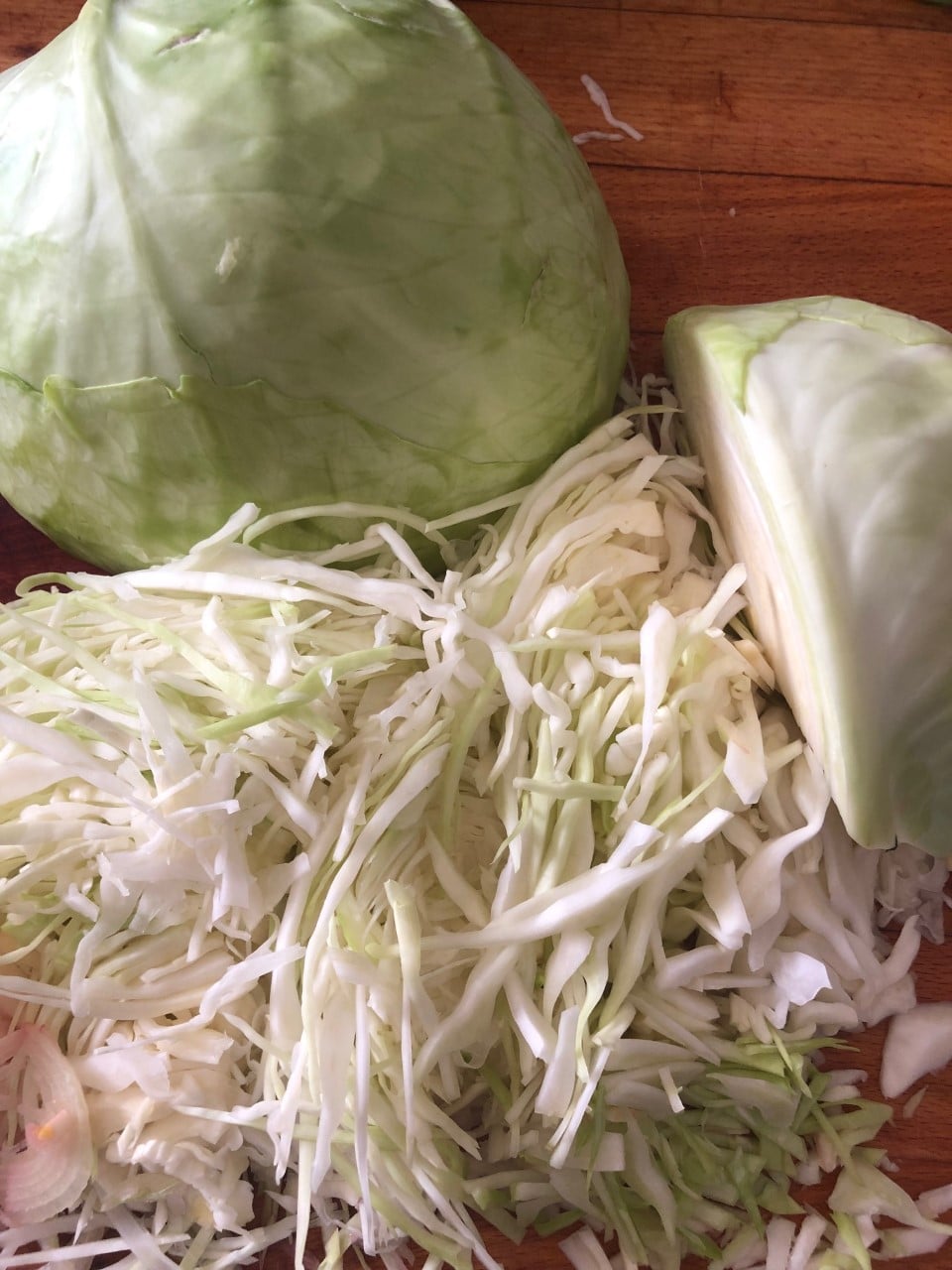 As I’ve written in the recipe below, if you’d like it a bit ‘less chunky’, feel free to insert an immersion blender and puree for a minute, leaving some chunky bits. I prefer to use a potato masher which gives you a finished soup with some beautiful textures! 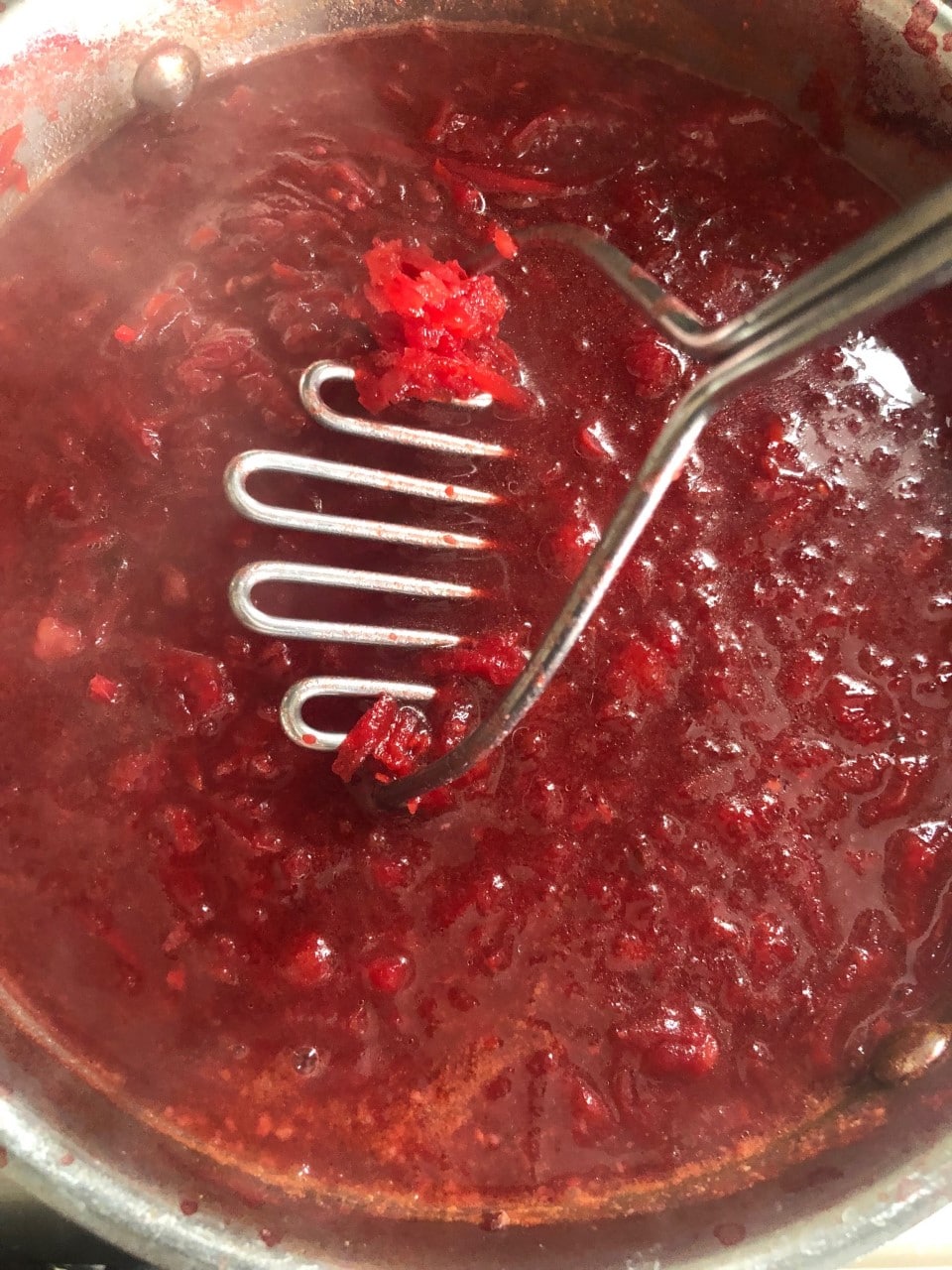 Not only is this soup delicious but it feeds a crowd and is so healthy (and filling!) 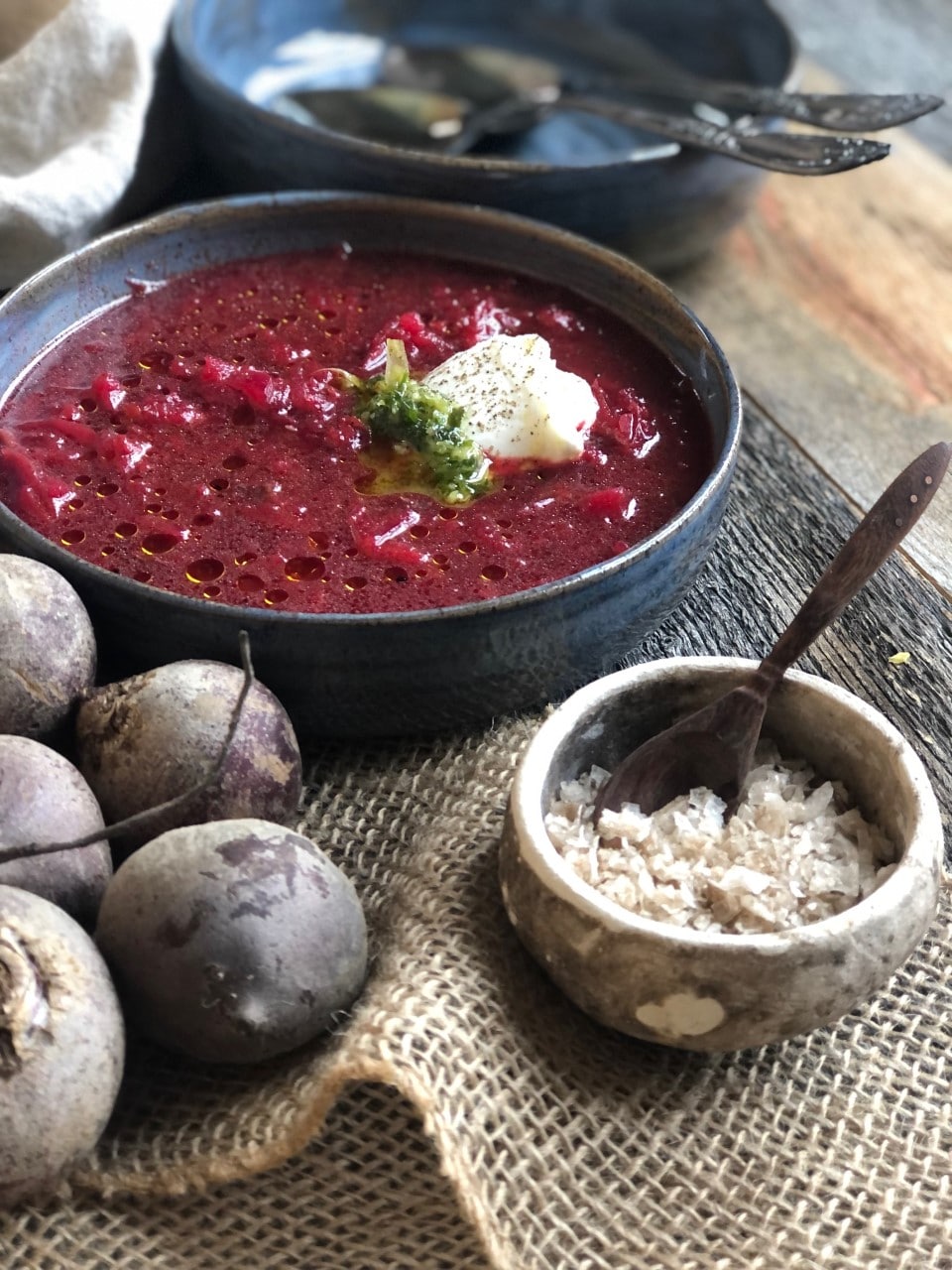 So, there you have it.

A beautiful soup that hails from the incredible people of the Ukraine. A place with incredible history and delicious food that is worthy of being brought into the forefront…especially during these trying times.

I know that posting a recipe will not end a war, but making a small donation will indeed help. I asked Aimee about all of the different places to donate and she pointed me in the right direction. Sending funds to a place that needs so much aid made me feel like my small act might help a mother who is struggling to feed her children. If you feel that you could do the same, I will share an excerpt from Aimee’s post:

“I respectfully ask that if you use this recipe for Paska, and are able to spare some money, please make a donation to our fundraiser. Today I am partnering with Olia Hercules, Alissa Timoshkina and hundreds of cooks and bakers around the world in their Cook for Ukraine movement.

All proceeds will be directed to UNICEF UK’s Ukraine appeal, supporting children and families.”

This hearty soup is a great lunch with a side salad and a thick slice of fresh dark rye bread!!