I went to Spain once and I fell in love with churros.

These lovely fried sticks that were like long cinnamon sugar coated donuts served with a chocolate dipping sauce were the best thing I had ever had. Yes, it was probably high on the awesome scale because I was on vacation…in Spain…drinking lots of sangria. But they were so good…hot and sugary and the absolute best way to end a meal in Spain.

I really hoped that this was something I missed entirely while walking the streets of Toronto before I left for Spain and was hoping to find a street vendor who sold these when I came back home.

Uhhhhmmmm, ya, I found them, but they’re downtown (40 minute drive from my house).

So, if I could figure out a faster way to make these, then why wouldn’t I just make them myself?  I have made the traditional ones, piped through a bag into hot oil and coated in sugar and cinnamon.  But, it takes time and sometimes, I just don’t want to deal with the fuss.

So, tonight is Cinco de Mayo and I made virgin strawberry margaritas, fish tacos and I just didn’t have the energy to start the fryer.  But I did have a couple of tortillas left over and I had my wild imagination.

Could I re-invent the churro?  Make a decent substitute in half the time (and way healthier?)?? 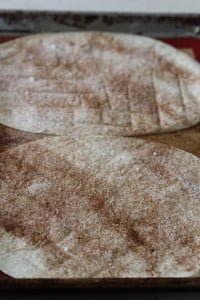 1.  Preheat the oven to 375 and lay 2 large tortillas on a cookie sheet and spray them both liberally with cooking spray

2.  Sprinkle the sugar evenly over both tortillas and then sprinkle them with the cinnamon.

3.  Place in the oven until they begin to brown (about 5 minutes – you will smell the cinnamon sugar…watch the oven as they can burn quickly).

4.  Turn off the oven and take them out; cut them into 8 equal wedges and place them back into the oven to crisp up a bit more (only if they aren’t fully crisp yet) 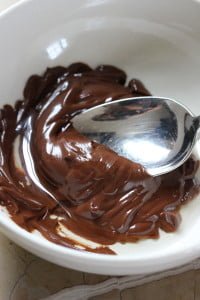 6.  Add the oil and stir until smooth. 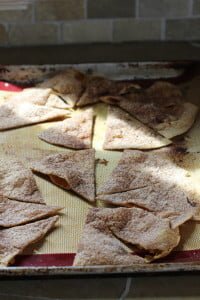 7.  Take the triangles out of the oven and drizzle with the chocolate using the back of the spoon and running it back and forth over the tortillas. 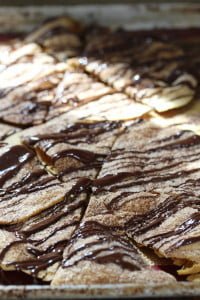 8.  Let them cool and either serve with some fruit kebabs or with some vanilla ice cream!

Happy Cinco de Mayo…hope yours was great (and full of yummy goodness!!)