Years ago, I was at a restaurant with my kids and I was watching a waitress who was busily serving her tables and I noticed how great her jeans looked on her.  They were just a regular pair of Levis but they looked amazing (can you tell how hard it is for me to find a really great pair of jeans?).  I thought “should I tell her what I was thinking”? Would she think I was some middle-aged  stalker?  Then I started thinking about how many times people have nice thoughts about others but don’t share them.

So, to the chagrin of my children (because we all know how easy it is to embarrass our kids), I called over the young girl and told her what I was thinking.  She was so happy!  She said she was having a terrible day and now, it was beginning to get so much better.

From that moment on, I decided that I never wanted good thoughts to go “un-shared” so I started writing letters…the old fashioned way, with real paper in a real envelope and a real stamp and placed in a real mailbox. On the first of every month, I would write a letter to someone who needed to hear how awesome they really were.

It was wonderful.  When I would decide who to write the letters to, names would just come to me.  More often than not, the names came to me for a reason.  It seemed that when my letters arrived in their mailbox, it was always at a time that they needed to be lifted up.  Funny how the world works that way.  But it still felt like something was missing. 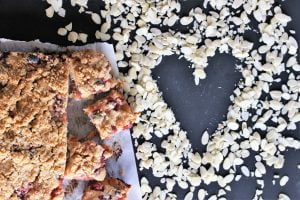 What if I could fill people’s bellies as well as their hearts? Could I do this every week?  Would people stop listening after a while?  What if people missed the point of Bake it Forward? What if it looked more narcissistic than loving? Was my skin thick enough to get past that? 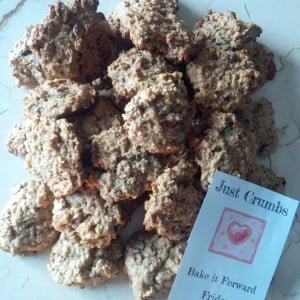 I decided that I should just start and let things fall as they may.  If it was well received, I would definitely continue.  If not, I could stop at any time.

So start I did and today, three years and thousands of cookies and cakes later, I am still baking it forward.  And what makes me happiest of all – besides the happiness that it brings – is that others are baking it forward now too. 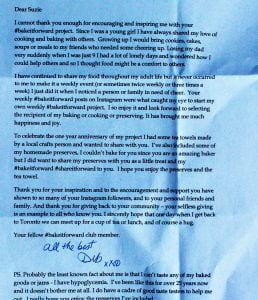 I recently received a beautiful letter from Deb Abbott from Ottawa, a friend I made through social media. A year ago, she commented on one of my posts and began her own Bake it Forward Project in Ottawa.  The letter was so heart warming and I love that I inspired her to Bake it Forward in her own way and in her own town! 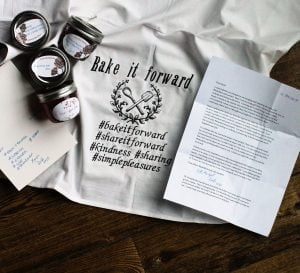 She even had a local artisan create these lovely tea towels for her and she included it in the package she sent to me along with her very own preserves!  This is what I wanted…for there to be a movement where there would be a ripple effect and small acts of “sweetness” would make this world of ours a wee bit brighter. 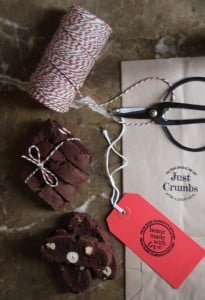 We often believe that we live in a world where evil surrounds us… oftentimes because of the actions of others.  But, like I’ve said before, if we only knew everyone’s story, there isn’t a person on this earth we could love more.

Today, February 17th, is Random Acts of Kindness Day.  We can all be part of the bigger picture to see everyone we meet today with different eyes.  Remember that no person would choose to be cruel…I wholeheartedly believe it’s not how we’re wired as humans.  Remember today to see the good in people – even if it takes more effort.  Find empathy in bad situations and be kind…always. 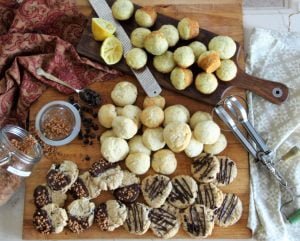