It’s been a rough week here in Canada.

A few days ago, there was a horrific bus accident that took the lives of 15 people that were on route to a play-off hockey game.  Many of those who perished were the young hockey players themselves, most of whom had successful hockey careers ahead of them.

The news traveled around the world, prompting leaders from all over to send their condolences to the small town of Humboldt, Saskatchewan where the crash occurred.  The sadness seemed to permeate so many places…schools, hockey arenas, churches, workplaces.  But it also brought back memories for many moms and dads (myself included ) who spent years driving to small towns all across the province to watch their kids do what many Canadian kids do…play hockey.

As a Canadian mom whose kids played hockey, there were times that bus trips were necessary…times that you had to trust that your kids would get to where they needed to go, play their game and return home safely.  Unfortunately, that isn’t what happened to a group of boys in Humboldt. Because so many of us could put ourselves in the shoes of those parents who are now mourning, this has been a hard cross to bear for all of us.

But in true Canadian fashion, we came together and are trying to help to pick up the pieces for those who are suffering.  A GoFund me page was set up to raise a bit of money to help those in need (including some of the surviving hockey players that were left with lifelong injuries).

It has raised over $6 million dollars in 3 days.

That warms my heart.

Also, because one boy who died donated his organs (which helped 6 people go on to live normal lives), there was a huge surge in Canada’s organ donor campaign. And, to send a message of solidarity to those who are suffering – making sure they know that our all of our hearts are broken too – Canadians across the country left hockey sticks outside their doors to show all of those affected that our thoughts are with them (I left one stick for each life that was lost). 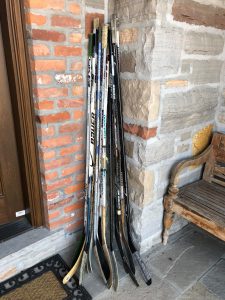 We all came together like Canadians do…#putyoursticksout and #prayersforhumboldt was seen trending everywhere.

My heart is still heavy.  But I am trying to remember everything good about our hockey years, including the amazing friendships that were formed, the great tournaments that we were a part of and, in true foodie fashion, the hundreds of plates of pasta that were consumed before games.   As I remember one of the quick dishes that were part of my “get out the door” repertoire, and the good feeling I had knowing my kids were on the ice with full bellies and happy hearts, I hope the rest of the country remembers the same…how hockey will always be a part of our fibre and how it brings us together as a nation.

Thinking of all of you in Humboldt…may your hearts mend and may you find solace in knowing your country will never forget the pain you have had to endure. 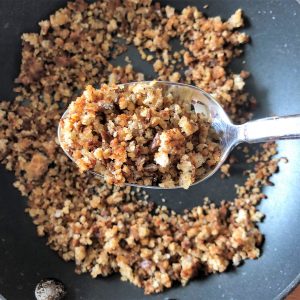 Save Print
Spaghetti Aglio e Olio with Crunchy Breadcrumbs
Author: Suzie Durigon
Recipe type: pasta
Cuisine: Italian
Prep time:  5 mins
Cook time:  10 mins
Total time:  15 mins
Serves: 3
Pasta is dish that many moms and dads make for their kids before hockey...carb heavy, but light on the tummy. Pasta Aglio e olio (pasta with garlic and olive oil) is a standard "there's nothing in the house" dish, but when you add the crispy crumb topping, it elevates it to a whole other level!!
Ingredients
Instructions
3.5.3239

Remember when we had parties and made big charcute

Having a hard time sticking to a healthy eating pl