I know you’re making bread…I know you are!

In which case, I know you have a pile of spent sourdough starter (discard) that’s hanging in your fridge – and please, for heavens sake, don’t tell me you’re trashing it!!

Like, come on! What the heck! I want a recipe that uses way more than that … because if you’re like the rest of the world on their bread making journey, you have a bunch more than 1/4 that you need to deal with!

So I searched King Arthur Flour website (and for those of you that are new to baking, it’s such a wealth of info…unfortunately, they don’t their stuff in Canada but I’ve purchased their products when I’ve gone to the US and everything that I’ve ever tried is great!!). They have a bunch of recipes there and many of them use a decent portion of discard so I was pleased to take a peek. 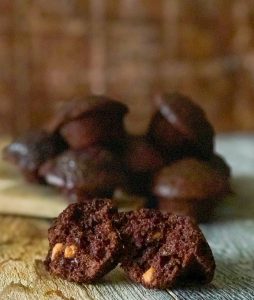 They had a recipe for chocolate cake with frosting so I played around with that recipe, added peanut butter chips and made it into two-bite brownies.

When you start putting the ingredients for these babies together, it will seem like you are doing something very, very wrong…

The sponge will seem too sticky…but when you add it to the chocolate mixture and mix it all well, it becomes a luxurious cake batter. 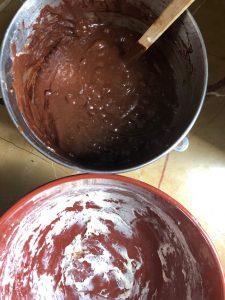 Once they are baked, they become these glorious baby cupcakes that are seriously epic! 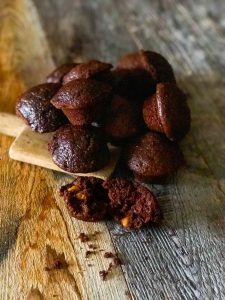 And if you aren’t one of the 42 million people making sour dough bread, you can just make these gluten free black bean brownies…same fudgy texture without the sourdough starter.

But you really do need to get on this sourdough thing…

I mean, bread is the new toilet paper.