It’s spring and asparagus is in season.

When spring is upon us, I think about how lucky we are to live in a country that has 4 seasons…and, in the dead of winter, it always makes me happy to think that asparagus and rhubarb are just around the corner.

I was asked to join a group of food people last week on an asparagus tour (sponsored by Ontario Asparagus).  What a great day we had (if you follow me on Facebook – or even if you don’t – you can click on the Facebook icon on the top right corner of the blog and then scroll down until you get to an album I posted about the tour).  I learned that asparagus grow sooo fast (just under 1 foot each day!) and that it is one of the few vegetables that have never been genetically modified – so cool!

At the end of the tour, I was given 11 pounds of asparagus to cook with and I have been cooking up a storm…and I’m still not sick of it!

This dish was a nice way to spruce up a stalk of asparagus…crunchy, salty, smokey, flaky and soft.

It doesn’t get better than that!!

1 bunch asparagus (about 30 stalks), with the tough ends cut off

8 sheets of phyllo, defrosted overnight in the fridge (remember, phyllo is not like puff pastry which cannot be re-frozen…phyllo can!)

1.  Preheat your oven to 400; unwrap your phyllo and take out one sheet (cover the rest with a damp paper towel to keep it moist while you work – it dries out quickly). 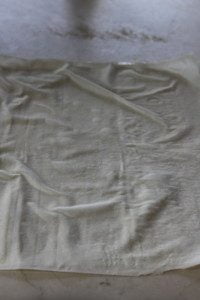 2.  Spray the sheet with cooking spray or brush it with some of the melted butter; fold in half. 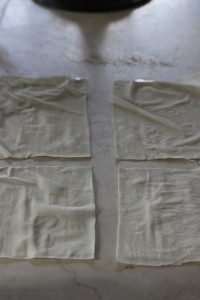 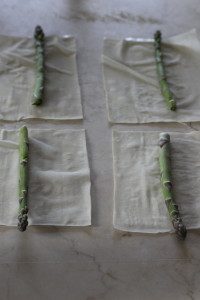 4.  Lay the asparagus on each square with a bit of the tip exposed. 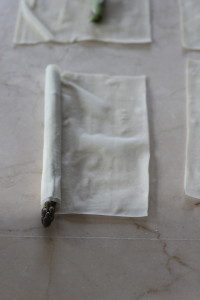 5.  Roll the phyllo tightly around the asparagus (keeping the seam at the bottom so it doesn’t unravel). 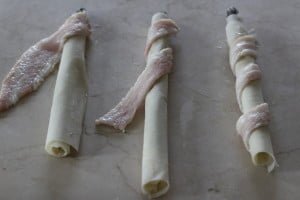 6.  Cut each rasher in half (you don’t want to completely cover the phyllo) and wrap it around the asparagus; bake for about 5 minutes, turning once.

7.  Serve as a side for a salad or on a buffet table, standing up in a tall ceramic container.

So pretty, so yummy (even at room temperature) and not the least bit unhealthy – well at least it’s more healthy than a real cigar! 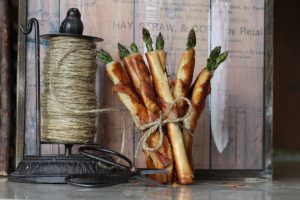